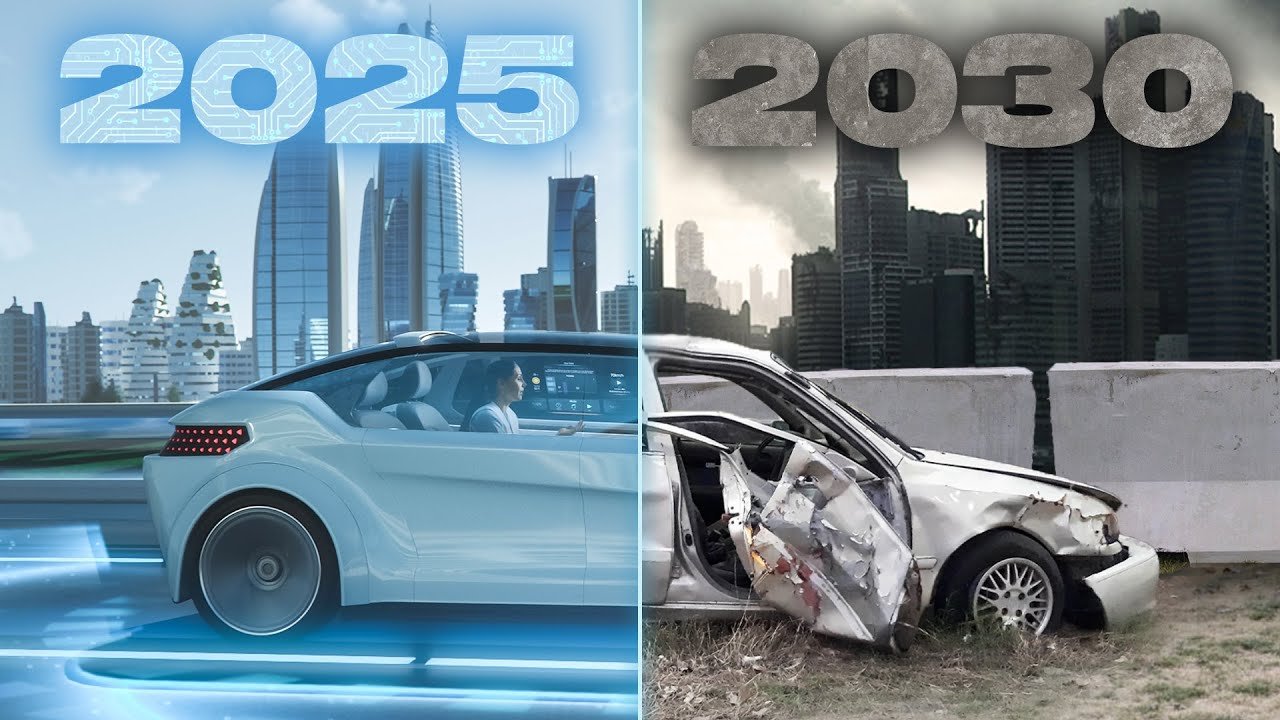 Why Electric Cars Companies Are Lying To You? Take A First Look.:- The electric future is here. At least that’s what most people say. Governments said it’s my way or the highway, before announcing dates when gasoline cars will be completely banned.

Car makers have to get on board to avoid extinction. This means there’s the potential to invest and win big here. But at the same time, nations are battling to get these precious metals that Tesla, Ford, Nissan, and others need. Something that has its own set of shady conditions, conflicts, and corruption.

So are EVs “Cleaner”? What’s going on behind the electric race? And ultimately, who’s going to win? In 2009, a young engineer from MIT founded the car company Rivian. He combined his two passions nature and cars and decided to electrify two American landmarks: the truck and the SUV.

Rivian was seen as Tesla’s main competitor and rapidly attracted huge investors like Ford and Amazon, who ordered a fleet of 100,000 fully electric vans. This had credibility and hype around Rivian’s IPO in 2021, even though the company hadn’t sold a single vehicle yet.

The picture that, the biggest IPO in nearly a decade. For a company that doesn’t yet have a proven track record, it’s insane. Thanks to Tesla, the EV space is insane. Despite all this hype, shares of Rivian have since crashed, losing more than 80% of their previous value.

And there are many reasons for this: supply chain disruptions, energy concerns, and a bad tech market. But also the fact that EVs are not yet as profitable as traditional cars. Many major issues need to be addressed. The demand for electric cars, though, is surging.

The competition is cutthroat, and the clock keeps on ticking. Now, let’s consider the main question in a simpler way, where the engine of a normal gasoline car has around 2000 moving parts. The electric motor only has around 20.

So exhaust systems, cylinders, pistons, all that stuff disappeared. What’s essential in an EV is the battery. The battery is surprisingly large. It’s placed under the floor of the car and usually occupies a good chunk of the entire vehicle’s length.

The battery is also what’s responsible for the fact that electric cars are much heavier than regular gasoline cars. These batteries can weigh 600 lbs to 1000 lbs. Now, if you measure the tailpipe emissions of an electric car, of course, it’s much cleaner because it doesn’t burn any fuel. But beyond that, things get quite a bit more complicated.

Research shows that building an EV produces 60% more CO2 compared to a petrol car. And that’s mainly due to the making and disposal of batteries. So there’s a mix of metals that are needed to build a battery. You need lithium, cobalt, and nickel, three fellas that will play a big role in politics for years to come.

They are mainly found in faraway countries like Chile, Congo, China, and Australia. The problem is, mining and transporting these minerals is Extracting one ton of lithium creates about the same carbon dioxide as burning 15,000 lbs of coal.

And in the future, we need much, much more of these minerals. So all this happens before you even buy your fancy car. Then, once you finally get your cool Tesla, you need to charge it with electricity. Right? And how clean this is will depend on whether the country where you live creates electricity through clean, renewable energies or not.

To give you an idea, according to the ICCT, if you live in the US or Europe, your electric car will be 60% cleaner for the environment than a fossil fuel one. If you live in China, it’ll be about 40% cleaner. In India, it’s only about 20% to 30% cleaner. And here’s the bottom line.

If you take the overall life cycle of a vehicle, then electric cars are better for the environment than gasoline ones. But it just might take a little bit of time after production for that to fully pay off for the environment. And the good news is, things will get better because there’s still a long way to go with batteries and renewable energies.

What’s the future of the EV market?

Well, consider this. Both Europe and the US are planning to completely ban the sales of gasoline vehicles by 2035, which is not that far away.

And other major countries like China are aiming at the same date. Now, according to Bloomberg, out of all the cars in the world, which is a drop in the automobile bucket of just about 12 million total vehicles.

And that means two things. First, car makers need to hurry the hell up if they want to survive. But second, it means that there’s a huge market share here, an opportunity ready to be taken. This is a true shift in a massive, massive market.

And this is true both for native electric car makers like Tesla, Lucid and Rivian, who have an advantage because they’ve only ever made EVs since day one.

But also for traditional car makers like Ford or Volkswagen, they’ve been making vehicles for decades, sometimes over a century, and they’re now investing everything they can to make the jump. So the market is getting crowded. Ford’s F-150 Lightning, Audi e-Tron, and Tesla’s Cybertruck.

What’s stopping all of this?

Well, some technical problems and huge, massive political problems. There’s a saying about electric cars that they’re like pancakes. The first one sucks, and the second one is okay, but the third one is spot on. But to reach mass adoption, there are still some obstacles that need to be overcome.

One problem is range anxiety. In other words, the fear that there’s not enough charge in the battery to get wherever you need to go, and that you’ll just be left cursing in the middle of the desert. This was understandable in the beginning when the range was modest.

But now many models easily cover 200 or 300 miles on a single charge, which is a lot if you remember that Americans drive about 30 miles per day on average. This is also helped by the fact that governments and companies are investing massively to build thousands of charging stations.

But will they be efficient compared to regular gasoline pumps? I mean, they have to be, because many car owners simply don’t have a garage or driveway where they can charge their car. And then we have the price. Price is a huge factor. Electric cars are more expensive than gasoline cars.

And even though it’s true that the running costs of electric cars are lower, many people are still scared to spend big bucks upfront. But this problem is mainly due to the higher costs of the minerals needed to produce these massive batteries.

However, this is expected to change because battery prices are dropping. This takes us to some even darker problems, starting with the battery race. If before we had oil, now we have these guys. Cobalt, nickel, and especially lithium are everything in this electric revolution.

And according to Bloomberg, the demand will grow by 15 times by 2030. So much so that if we don’t recycle it properly, we’ll run out of lithium completely by 2050. Now, major countries like the US. Produce just about 1% of the global output of lithium and completely outsource the rest.

And one thing that nations learned during the shortage of semiconductors is that it’s dangerous to rely on imports of essential materials. Especially if you consider that China alone does more than half of the processing and refining of lithium in the world.

But why? Because China right now makes and sells batteries cheaply and is taking over the market for electric cars. Their cars are affordable and sometimes cost even less than their gasoline counterparts. Chinese brands like Nio or BYD, which is backed by Warren Buffett, are becoming strong contenders.

So traditional automakers need to watch out. But the issue is even bigger than that. Superpowers play monopolies around the globe to seek the resources that they need. And often these minerals are extracted in questionable conditions.

I mean, take the Democratic Republic of Congo, one of the richest nations in the world when it comes to minerals. During World War II, Americans went there to get uranium for, well, you know what for. And it turns out Congo is also chock full of cobalt, more than any other country in the world.

But currently, China owns and controls the majority of these cobalt mines. Well, American automakers like Ford, GM, and Tesla buy cobalt from the Chinese. Well, in these mines, workers are paid around thirty cents an hour working tight tunnels. And if they get sick, they just don’t get paid.

So a priority for the EV industry has to be finding a different way, some more sustainable method to get these minerals and do it cheaply.

This all brings up a question Right now, the markets in Europe and the US rely on public subsidies and tax incentives. This helps them achieve their tight deadlines. And it’s not only about vehicles, but also infrastructure. But

What about other countries?

Well, some researchers suggest that the transition might be more difficult in developing nations than we think. This is due to a variety of barriers that are mainly technological and financial. Examples are the capacity of the electric grid to charge all of these cars, and the ability to build a vast network of charging stations. This is still an open question, but two and three-wheelers seem to be a popular solution in these countries.

Meanwhile, data suggests that lowering the price of EVs will help dramatically. What sure is the electric race is on. The US, Europe, Japan, and China are all in, and this is a real revolution. If in the past the car sector was hard to get into, now the electric one is a whole new thing with new rules and new players.

What, like it’s hard? The objective of zero emissions is still ahead of us, and there are many problems yet to solve. However, there are great opportunities to invest in this market. So let’s buck up because some of the old names will go and new names will come and take over.

This space will be completely different 20-30 years from now. Investing in this space is a matter of thinking long-term. Refusing to buy into massive hype and scooping up deals as they happen to come by. Just being patient. Because where there might be exciting in the short run,

Thanks for reading till the end. Comment what your opinion is about this information:– “Why Electric Cars Companies Are Lying To You? Take A First Look.”

1 thought on “Why Electric Cars Companies Are Lying To You? Take A First Look.”