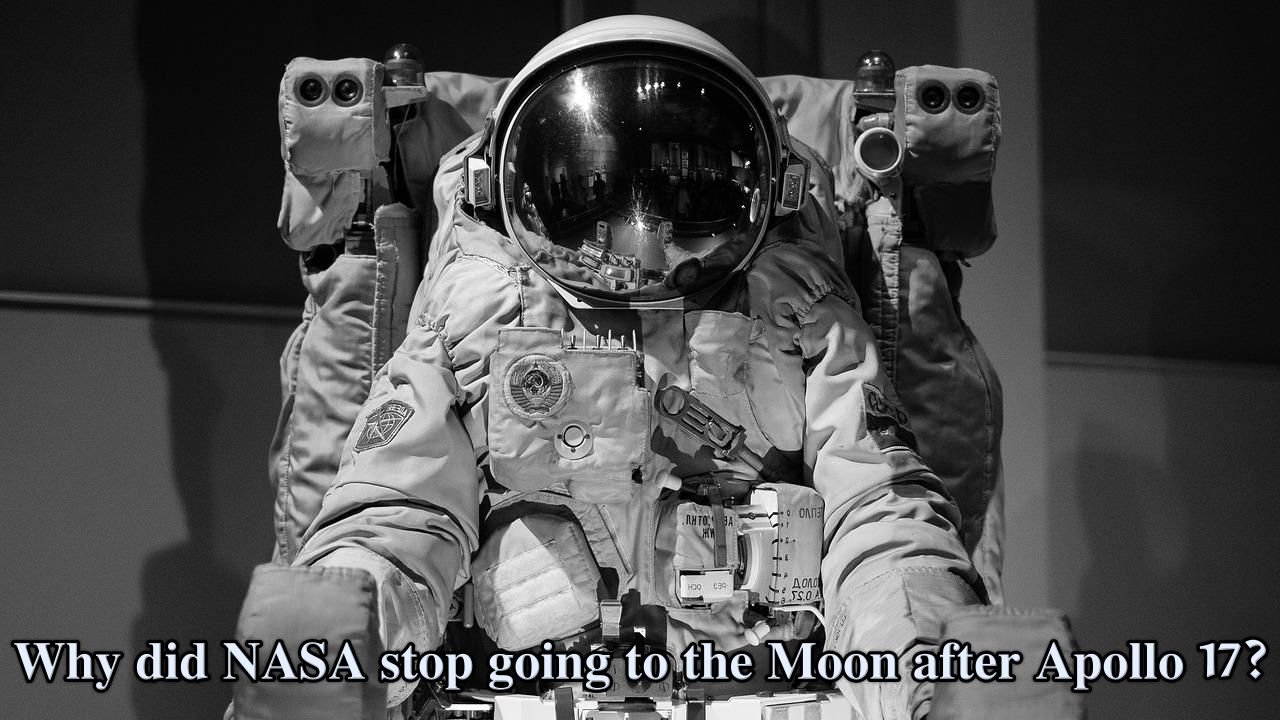 It’s a question that has puzzled historians and NASA experts for decades. After three successful Apollo missions to the moon in 1969 – including the iconic first landing – it seemed like the race between America and Russia to conquer space had been won by our country.

Yet, for some reason, NASA stopped sending astronauts to the moon after 1972, despite having several more Apollo missions planned. What happened?

The short answer is that it was expensive, there were waning political incentives (i.e., winning the Cold War), and with all of those factors considered, astronauts weren’t needed up there anymore. Let’s dive into this fascinating facet of American history where we’ll find out why NASA stopped going to the Moon after 1972’s Apollo 17 mission.}

The Apollo Project was created to beat the Soviet Union in space exploration.

The Apollo Project was created to beat the Soviet Union in space exploration. In 1959, Russian cosmonaut Yuri Gagarin became the first man in space and the US was worried that their competitor would reach other planets before they did.

The race to get to the moon began in 1961 when President John F. Kennedy announced that it would be accomplished by 1970, with Apollo being its name for missions 11 through 17 (the first eight were called Mercury). The Soviets weren’t sure if this was possible so they sent up a dog named Laika on Sputnik 2 to test what life would be like for humans on a spacecraft orbiting Earth.

The Russian’s Luna 3 brought back the first images of the Moon’s far side in 1959.

After Apollo 17 landed on December 11, 1972, NASA stopped sending astronauts back to our closest celestial neighbor. However, there are still many mysteries left to solve—and we may not have heard the last from them yet!

President John F. Kennedy set a goal of landing a man on the moon by 1970.

In 1961, President John F. Kennedy set a goal of landing a man on the moon by 1970. This was part of his “New Frontier” program to bring science and technology into everyday life for Americans.

After Kennedy’s assassination in 1963, his successor Lyndon Johnson continued this vision but did not commit as much funding to it as had been anticipated by NASA.

As a result, although Apollo 11 successfully landed astronauts on the moon in 1969 (when Johnson was still president), no more missions were launched after Apollo 17 because NASA could not afford another mission with an uncertain outcome or be able to compete with Soviet space efforts budget-wise (the Soviet Union had already beaten U.S.-led attempts at launching two dogs into orbit).

Two Americans died during an Apollo mission test that caught fire in January 1967.

In 1967, a test of the Apollo-Saturn 5 rocket caught fire at Cape Kennedy, Florida. The fire was caused by a spark from a wire rubbing against a fuel tank. It was an accident that took the lives of astronauts Virgil “Gus” Grissom and Edward White.

The accident occurred during one of three scheduled tests for NASA’s newest mission to send astronauts to the Moon. The first two tests went smoothly, but during this third test something went wrong when wires got tangled in wires coming from another part of the spaceship—causing sparks and ultimately setting off an explosion (which you can see in this video).

Grissom and White were able to escape from their capsule before it blew up; however, both men died when they reentered Earth’s atmosphere after being exposed to lethal levels of heat and pressure.

NASA shut down some of its Apollo missions and released a safety report after the tragedy.

In January 1967, NASA shut down some of its Apollo missions and released a safety report after the tragedy. The report outlined ways in which the space agency could improve both astronaut safety and mission efficiency on future flights.

The decision to stop going to the Moon was a result of this report. It showed that it would be safer if they didn’t send astronauts any farther than they already had been because there was a high risk of losing them if something went wrong.

The Soviet Union put the first man in space but was beaten to the Moon.

The Soviets were the first to put a man in space, but the United States won the Moon race. In 1961, Soviet cosmonaut Yuri Gagarin became the first human to leave Earth’s orbit and orbit around our planet.

The next year, President John F. Kennedy announced that America would land humans on the moon before 1970—and it did exactly that with Neil Armstrong and Buzz Aldrin walking on its surface for three days in 1969.

Neil Armstrong and Buzz Aldrin became the first people to walk on the moon on July 20, 1969.

The Apollo 11 mission was the first time humans walked on another world. Neil Armstrong and Buzz Aldrin became the first people to walk on the moon on July 20, 1969.

Neil Armstrong was the first person to step onto the moon. He said: “That’s one small step for man, one giant leap for mankind.”

Buzz Aldrin was the second person to step onto the moon. He said: “Beautiful view.”

NASA canceled four more Apollo missions and halted plans to go back to the Moon in 1970 and 1971 due to budget restraints.

After Apollo 17, NASA canceled four more missions and halted plans to go back to the Moon in 1970 and 1971 due to budget restraints.

Public interest in space travel was waning because of the Vietnam War, which was consuming much of America’s attention during this time period. In addition, other priorities were taking precedence at NASA—for example, developing programs like Skylab and preparing for future missions like Voyager I/II.

Some safety concerns were also raised about sending human beings on long space flights after Apollo 13 experienced an explosion due to an oxygen tank malfunction on its way back from the Moon in 1970.

The Soviet Union launched multiple lunar probes, but they all came up short or failed entirely.

In 1959, Russia launched Luna 1, the first satellite to leave Earth’s orbit to reach another celestial body. It missed the moon by approximately 3,900 miles and continued on in space forever.

NASA wound down its manned program after Apollo 17 landed on December 1972.

After Apollo 17 landed on December 1972, NASA wound down its manned program. The last three missions to the moon were canceled in favor of other projects, like Skylab and the Space Shuttle.

NASA stopped going to the Moon because it lost its appeal and funding dried up, making it no longer worth it politically or economically.

As you may know, the Apollo program was expensive. In fact, it cost $25 billion over a decade to get six people to the Moon and back again. President Richard Nixon even said that he initially opposed funding NASA because its budget made up just 0.5% of the federal budget—a tiny fraction compared to other agencies like education or health care.

After that initial success with Apollo 11 in 1969, NASA’s budget was cut by 40% between 1970 and 1975 as part of a government-wide effort to reduce spending during Vietnam War protests. This meant that there wasn’t enough money for NASA to continue sending astronauts into space or back out into space—something called “Apollo fatigue.”

Instead of focusing on going back to the moon again, President Nixon focused on developing new technologies such as reusable rockets and creating an orbiting space station called Skylab with what little funds were left over from the Apollo missions

NASA decided to stop going to the Moon because it lost its appeal and funding dried up, making it no longer worth it politically or economically. But now NASA has current plans of returning humans to the lunar surface the Artemis Mission. They are planning to land humans on the moon in 2024.

2 thoughts on “Why did NASA stop going to the Moon after Apollo 17?”