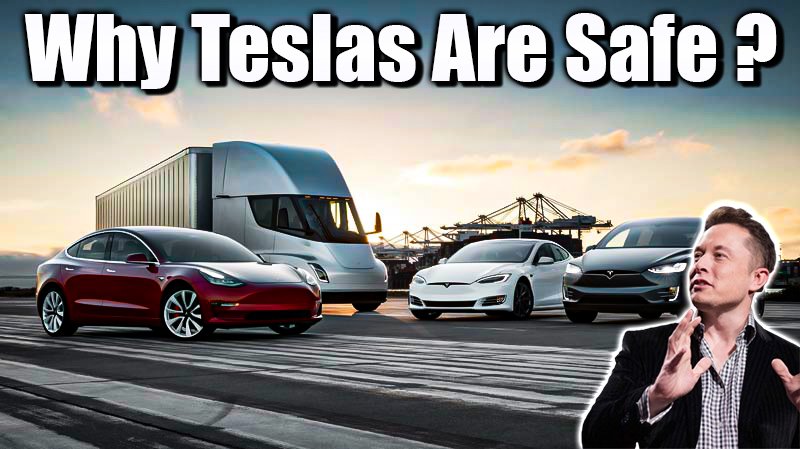 What Makes Teslas So Safe. Take The First Look:- Car safety has improved drastically over the years. And one company appears to be leading the pack. Teslas have consistently received five-star ratings from organizations that perform crash tests, such as the Insurance Institute for Highway Safety.

One of the reasons you’re safer in a Tesla is that electric cars don’t have an engine, so all the steel and aluminum on the front crumples and absorbs much of the impact, preventing it from being transmitted to the occupants.

The lack of an engine isn’t the only reason they’re safe. This has to do with the overall structure of the vehicle. It is difficult for them to roll over since the heavy battery pack and electric motors sit low in the vehicle because they have a low center of gravity.

The US road safety regulator, NHTSA, has determined that the mid-size SUV, the Model Y, has a rollover risk of about 8%. Tesla says it has the lowest risk of any SUV it has ever produced.

And less than likely to roll over the Model X. In the unfortunate event it overturns, Tesla relies on the strength of its roof to protect the inside.

The Model 3’s roof has been found to resist over 20,000 pounds of force—about six times its weight. Or, as Tesla points out, it can withstand the weight of roughly two full-grown African elephants.

The part of a car that offers the least amount of protection is the side – since there’s no area designed to crumple, unlike the front and rear ends.

To address this side panel weakness, Tesla has reinforced it with ultra-high grade steel, shown in teal blue, while the battery pack also acts as a barrier. In case of a side collision, the Model 3 has a thicker curtain airbag which also contributes to the higher safety rating.

A real-world example comes to mind. Recently in Oregon, the driver of a Model S hit a pole and crashed into two trees and a telephone box. The collision was so severe that hundreds of tiny batteries that worked together to power the Tesla were thrown onto the road.

Despite the damage, the driver walked away with only minor injuries. Tesla is also engineered to try to prevent accidents in the first place. A safety feature detects when the vehicle is crossing into the other lane and then steers itself back.

And Automatic Emergency Braking (AEB) detects obstacles and brings the car to a halt automatically. But there are still some knots to be ironed out.

When European safety experts Euro NCAP tested the braking system on a Model X, it avoided hitting a dummy resembling a child while traveling at 25 km/h (16 mph). But not at 30 km/h (19 mph) – though it did reduce the speed before impact. This type of technology isn’t new.

Volvo introduced an auto-braking function a decade ago. But Tesla is different because of its more advanced sensors which must be technically superior to avoid collisions.

A combination of cameras, radar, and ultrasonic sensors helps in navigation. The goal is to eventually have vehicles drive themselves without a human driver. You could say that Level 5 autonomy is the holy grail. Tesla is not there yet but is moving in that direction.

Select customers have been able to beta test its full self-driving software – which operates on both city streets and highways without the driver’s help. However, the driver still needs to pay attention and be ready to step in if the vehicle does not respond properly.

So it’s not autonomous yet, and if you ask rivals, it probably never will be. The CEO of Waymo, formerly known as Google’s self-driving project, dismissed Elon Musk’s company as a competitor, saying he doesn’t think Tesla will ever be autonomous. Musk retaliated, tweeting: Tesla has better AI hardware and software than Waymo.

Tesla’s full self-driving software is believed to be taking its vehicles from Level 2 autonomy to Level 3. The technology is a vast improvement over Autopilot—which has cruise control but fewer features than FSD—and is often limited to highway use.

With any system that isn’t fully autonomous, the driver has to be alert. Failure to do so may result in fatal consequences. In 2018, a Model X on Autopilot drove into a concrete barrier in California, killing an Apple engineer who was playing a game on his iPhone and failed to handle the car’s steering.

Although there have been concerns about the safety of the automated Tesla, the company has received stellar safety ratings with each new model it produces.

More importantly, someone is likely to be injured or killed. Tesla once touted the mass-market Model 3 as the safest car it had ever made.

Regulators took issue with that bold statement. In a letter to Tesla, the NHTSA accused the company of misleading consumers because it said it was “unfair” to rank vehicles of different weights.

Tesla retaliated by saying that its statement was based on NHTSA’s calculations. And the mayhem didn’t end there. In January, a government agency asked Tesla to recall 158,000 Model S and Model X models over failing touchscreens, which it said could increase the risk of accidents.

As if Tesla had made no public statements at the time of making this video. So, depending on who you ask, it’s up for debate whether or not Teslas are the safest vehicles. But it appears they are leading the pack, and as the technology continues to improve, the hope is that security will accelerate along with it.

Thanks for reading till the end. Comment what your opinion is about this information:– “What Makes Teslas So Safe. Take The First Look”