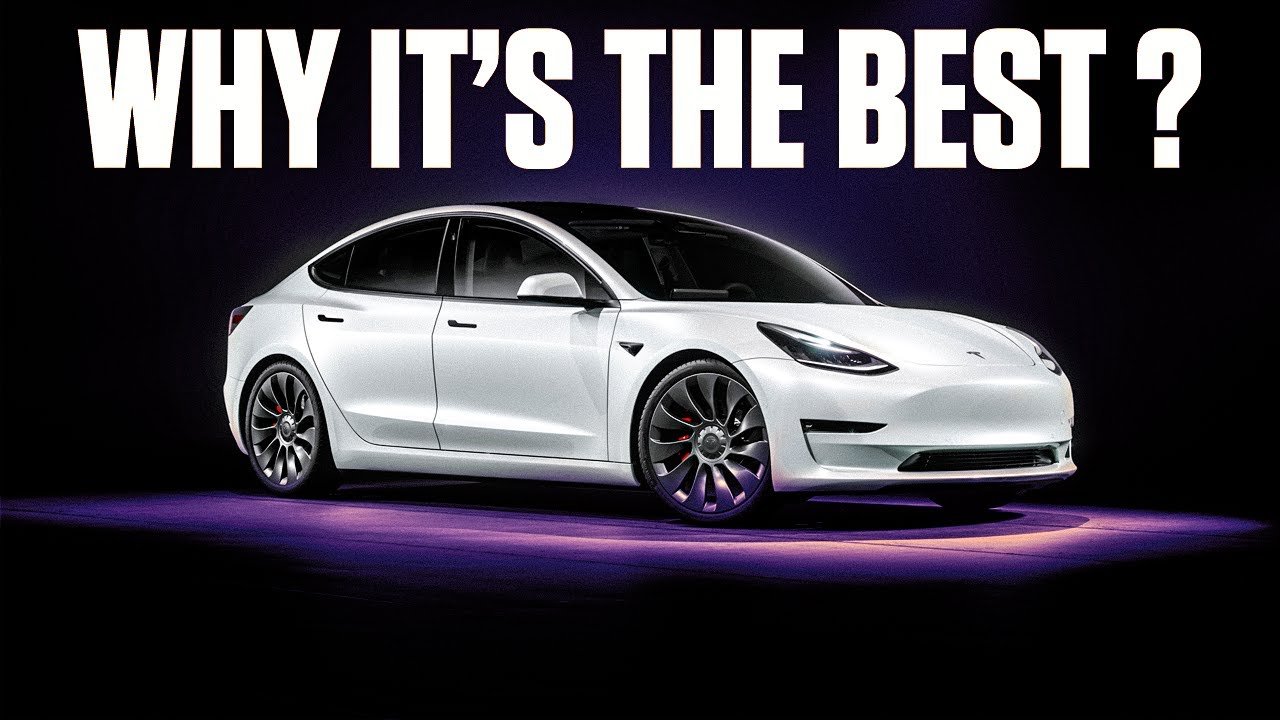 This Is Why TESLA MODEL 3 Is The BEST CAR?:- The Model 3 is the Tesla that shook the industry and demonstrated how far Tesla is ahead of the competition in terms of technology.

It’s a fantastic car, and it’s also the most affordable Tesla. Is the Model 3, however, the best car to buy this year?

There are several things that most people are unaware the Tesla Model 3 can do, but almost everyone is aware of its blistering performance figures. The fastest Performance dual-motor model can accelerate from 0 to 60 mph in 3.2 seconds. That is faster than many supercars.

Even the entry-level RWD model has a 0-60 time of 5.6 seconds, which is comparable to many small sports cars. The Model 3 Performance starts at $54,990, which is a steal given the performance figures. The base Model 3 starts at $35,000, which is reasonable given that it is faster than most cars in that price range.

The Tesla Model 3 is packed with cutting-edge technology. It has a 15-inch landscape touchscreen from which you can access the internet, Google Maps, TV functions, games, and so on. Then there are the cameras inside and outside the car, including one that guards the car and everything around it and is known as Sentry mode.

Tesla adds new features to the car on a regular basis. Increased range, new camera features, new driving modes, and improved performance are among them. They perform all of these updates while you sleep, so when you wake up, you have a new car.

Some believe that some upcoming EVs will put Tesla out of business. When it comes to technology, however, Tesla is crushing these mainstream brands.

Once upon a time, Teslas were only available to the wealthy. The original base Roadster, Tesla’s first vehicle, cost nearly $100,000 new. You can now get the cheapest new Tesla, the RWD standard-range Model 3, for only $35,000.

Tesla marketed the Model 3 as “the safest car on the planet.” They do have a point, as Tesla has received the Institute of Highway Safety’s highest honor, and the Model 3 was rated “good” in all six IIHS tests, putting it among the top picks for safety.

The National Highway Traffic Safety Administration declared it the safest vehicle ever tested. The Tesla Model S was the second safest, and the Model X was the third. This company is concerned about safety.

These vehicles also include lane change assist, an emergency braking system, numerous airbags, and lane departure avoidance. This is what makes this car so popular.

The Tesla Model 3 is an extremely comfortable vehicle. The Model 3 has conventional suspension, as opposed to the Model S. It also has a low center of gravity, which makes it much more stable in bends.

The Model 3 also has a large windshield that lets in a lot of light. When you combine that with the panoramic roof, this car becomes a mobile conservatory. The interior is also vegan, which is fantastic news for vegans and environmentalists alike.

The air conditioning is also excellent, which is essential in states such as California, Arizona, Florida, and Texas. It’s one of the fastest electric cars ever built, but it’s also one of the most comfortable.

Although the Tesla Model 3 is a compact sedan, it has more interior and storage space than any of its competitors. It comes with a trunk, a frunk, and folding seats. One of the benefits of not having an engine is the increased practicality.

The seats are also much slimmer than standard car seats, allowing for more legroom. Inside, the Model 3 has a lot of storage space. The interior is sparse, which means there’s plenty of space for your belongings. There is a phone holder beneath the large screen, a large glove box, a deep center console space, and, of course, cup holders.

This is obvious given that it is powered by batteries. The Model-3 is a zero-emissions vehicle, which is great for tax purposes and free parking. In a world where governments are becoming increasingly strict on Internal Combustion Engined vehicles, the Model 3 is without a doubt the most intelligent car to buy right now.

Most gearheads are unconcerned about the Model 3’s zero-emissions status. However, the future is shifting toward a carbon-neutral zone, and unfortunately, the government has more say than we do because we all live by their rules. Model 3 follows all of the rules, and it will not be as heavily taxed in the future.

The Model 3’s driving dynamics are incredible. The batteries are mounted on the floor, creating an extremely low center of gravity, similar to that of a go-kart. The suspension is also quite firm, making it stable around corners. AWD models have even more grip, which adds to the driving dynamics.

The Model 3 is ridiculously fast in the straights, and it’s also quite quick around the bends. It feels nimble and agile, like an excited dog ready to pounce. Before you buy one, however, read these 10 things the owner’s manual does not tell you.

The Tesla Model 3 is a simple vehicle to own. With the amazing Supercharger network, charging is simple, there is no need for oil changes, and these cars constantly update themselves. Tesla claims that using a Supercharger takes 30 minutes to charge to 80%.

The Tesla app is also extremely user-friendly, and the community as a whole is enormous. Elon Musk will respond to tweets about any issue. If you want a specific feature in the next update, simply tweet him, and if it’s okay, he’ll respond and include it.

There’s also no need to fill up on gas, which isn’t a difficult task in and of itself. The Model 3 can even be started, locked, and unlocked using your phone, eliminating the need to carry a key. Long-Range models have an extremely long range, in fact, one of the longest of any electric vehicle.

The Model 3 could be the best family car on the market right now. It has family-friendly features like a “virtual whoopie cushion” and video games. These may not appeal to the average gearhead, but they are better than a big V8 for young children.

All of the passenger seats also have Isofix child seat clips. It even has Wi-Fi, which is a must-have for most families seeking peace and quiet. You can also access Netflix and YouTube. This car is ideal for a family because it is spacious and filled with toys that everyone will enjoy.

Even old-school petrolheads are buzzing about the Tesla Model 3. It is the world’s best-selling electric vehicle, and it is so popular that you are bound to see one wherever you go. It propelled Tesla to new heights in both technology and automobiles.

With many consumers already expressing interest in purchasing a Model 3, which other manufacturers will see Elon Musk’s electric effect in their sales figures? The obvious competitors are the BMW 3 Series and the Mercedes-Benz C-Class, but that doesn’t mean other car owners will forego a ride in the Model 3. What could they possibly blame?

It has a low bonnet, a tall arched roof, and chrome trims and horizontal lights similar to the Tesla Model S and Tesla Model X. Inside, buttons have been virtually eliminated, with all controls managed via a 15.4-inch touchscreen in the center of the dash. Revolutionary, yes, but Elon Musk has never shied away from progress.

Thanks for reading till the end. Comment what’s your opinion about this information “This Is Why TESLA MODEL 3 Is The BEST CAR?“.