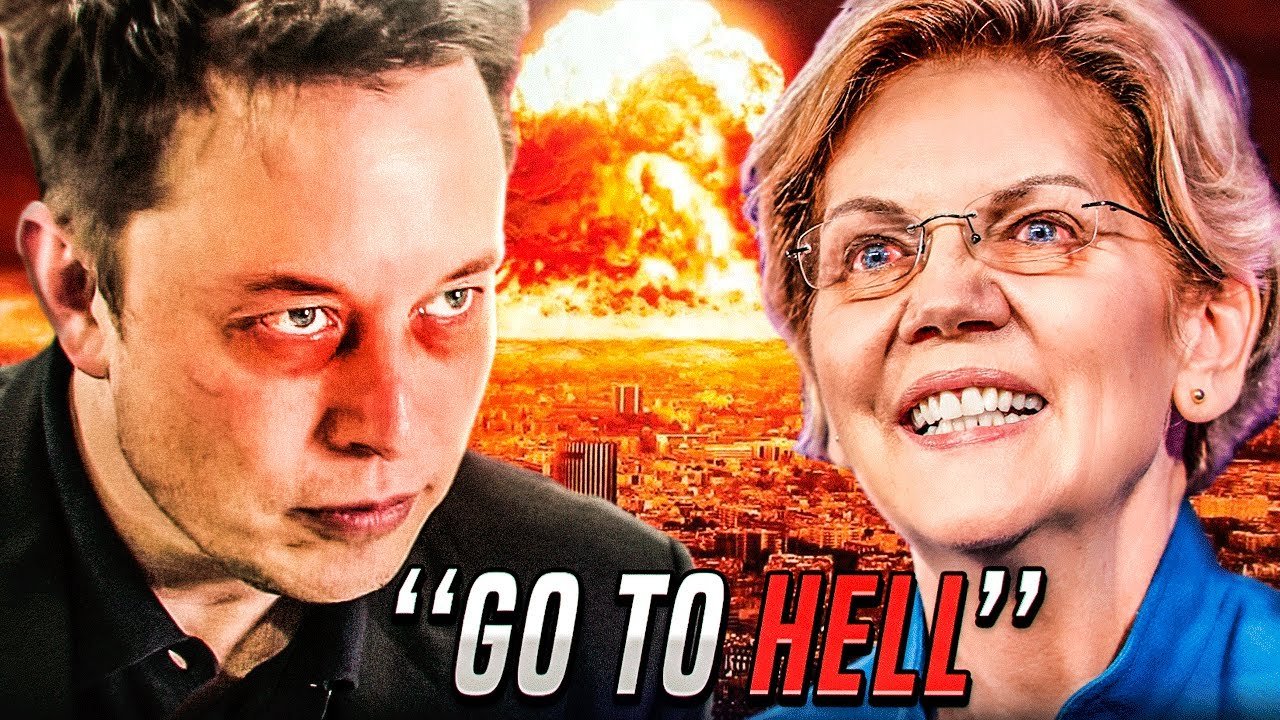 The REAL Reason Elon Musk Hates Elizabeth Warren:- The rivalry between politicians and businesses is nothing new. Seeing as both positions have only gotten more powerful in the last century, tension is bound to be seen. But the feud between us Senator ElizabethWarren and the world’s richest man, Elon Musk, is of another breed.

From calling each other direct insults like a Karen or a quote-unquote thin-skinned billionaire to more serious stuff like publicly stopping each other from achieving their goal, these are just a few things the two have done in their fight, so let’s talk about that, where they came from.

Now, Elon Musk is someone who needs no introduction from anyone. The guy is the richest man ever, owns and operates some of the world’s most influential companies, and is pretty much a real-life iron man by comparison to those who live outside of the United States. Elizabeth Warren is a politician and former law professor who represents the state of Massachusetts in the US. Senate.

While she has a lot of plans and ideas, the one she’s most famous for is wanting to reform the way we tax the ultra-wealthy. That alone would be enough to put the two against each other. However, starting in 2018, the professional rivalry started to become a lot more direct with the reveal of Elon‘s tax situation.

You see, back in 2019, the nonprofit journalism site took a look at how America’s wealthiest make their money and pay their taxes. We have to be honest, Elon’s situation did not look good. According to the report, between 2014 and 2018, musk’s wealth grew by $14 billion.

During those four years, the billionaire only paid $455,000,000 in taxes, which is a huge amount for anyone. But for someone earning that much money and the human way to spend it, that amount is less, even by the current taxation laws. And even worse, when the website asked him for a comment, instead of ignoring it or responding properly, his response was a very enthusiastic question mark.

So seeing this as a golden opportunity, warren decided to take advantage and spur her plan into action. Warren acted almost immediately following the publishing of the article, Warren and fellow Senator Sheldon wrote a letter to Senate Finance Chairman Ron Wyden, basically asking them to launch an investigation into the matter and, if possible, make reform.

It was during that time when she also made her first move against Elon, the first blow. You see, while the letter was being sent through the Senate, warren decided to use that opportunity for publicity as well. She did this by doing the same thing Elon often does make a tweet saying according to this report, Elon musk did not pay any federal income taxes in 2018.

Neither did Jeff Bezos in 2007. From 2014 to 18, the 25 richest Americans got $401,000,000,000 richer, but only paid3.4% of that in federal taxable income. We need a hashtag wealth tax. And while such an allegation from someone as influential as the senator was not to be ignored by Elon or his friends. As a result, when another Twitter user tweeted their favor, Elon responded by replying to the tweet with the following words exactly.

That was not the end, because just a few months earlier, in December of last year, came another infamous thread of insults between the two. This came as a result of Elon being named the Time Person of the Year for him finally being crowned the world’s richest man.

And when Warren decides to quote the said article, the following happened to the Person of the Yea You see, Warren argued that since Elon does not pay enough taxes and makes money off of his employees, the reasoning is that it makes him a freeloader, which makes him being named a Person of the Year rather controversial.

As a result, the senator tweeted an article covering the announcement with the words, let’s change the rigged tax codes the Person of the Year will pay taxes, and stop freeloading off of everyone else. And that seemed to strike a nerve for Elon because his response was not one tweet or even retweet, but three replies directly insulting the US. Senator.

First, he quoted an article by Fox News that mentioned how Elizabeth Warren had lied about her ancestry, claiming that she was part NativeAmerican to become more popular during her presidential race, and said that she should stop projecting.

If that wasn’t enough, he got even bolder and took a jab at her age and behavior, telling the former Democratic presidential candidate that she reminded him of an erratically, angry mom of one of his friends, saying, I quote, you remind me of when I was a kid and my friend’s angry mom would randomly yell at everyone for no reason.

Last but not least, the billionaire used an infamous Internet slur for white women who behave in an entitled manner Karen to refer to the Senator and said, please don’t call the manager on me, senator Karen. As for Warren, neither she nor her office provided any response to this barrage of attacks, at least not directly at the moment.

But as expected, it only took a few days five to be exact for the two to clash yet again in a passive-aggressive manner, this time in the form of subtweets regarding the taxes Elon was supposed to file for the 2021 fiscal year musk’s tax commitment. Just five days after the incident, on December 20, Elon, trying to prove the wrongness of Warren’s actions, took to Twitter to announce the number of money he would be filing, which, to be fair, was a lot over $11 billion.

But it wasn’t the announcement that got Warren or even the amount. It was how it was given and the action it caused you to see, Elon had tweeted, for those wondering, I’ll pay over $11 billion in taxes this year. And while sure that’s good for him, the tweet caused a lot of headlines, because this was the kind of the first time any of us were even hearing about billionaires paying taxes, let alone the knowledge of just how much these taxes were.

Which struck a nerve with Senator Warren, who said that even though he was doing exactly what she had asked him to do, it wasn’t enough, and that, in her words, it should not be breaking news when a billionaire follows the law. I’ve got a plan to make sure it is breaking news when a billionaire pays any taxes. Hard-working teachers, waitresses, and plumberspitch in without making headlines.

We need to fix our rigged tax code because the issue is bigger than one thin-skinned billionaire. Now, that was the end of the feud on Twitter, at least for now. But that doesn’t mean that it stopped two from being offensive on other platforms, more specifically in interviews. So let’s talk about those, the late happenings first. Elizabeth Warren most recently made an appearance on the New York Times Sway podcast.

Understandably, it was only a matter of time before the podcast host, Kara Swisher, asked her about the Twitter debate, and Warren was quick to respond. First, according to her, Elon was trying to make it a personal issue when she was trying to fix and call attention to an actual political problem.

Or in her words, what he’s hoping for is that this is personal and that is his way of responding. It’s about trying to make it personal instead of talking about what’s wrong with the tax system, which would be nice, but it is interesting to note that she was the one who mentioned Elonand singled him out from all other billionaires