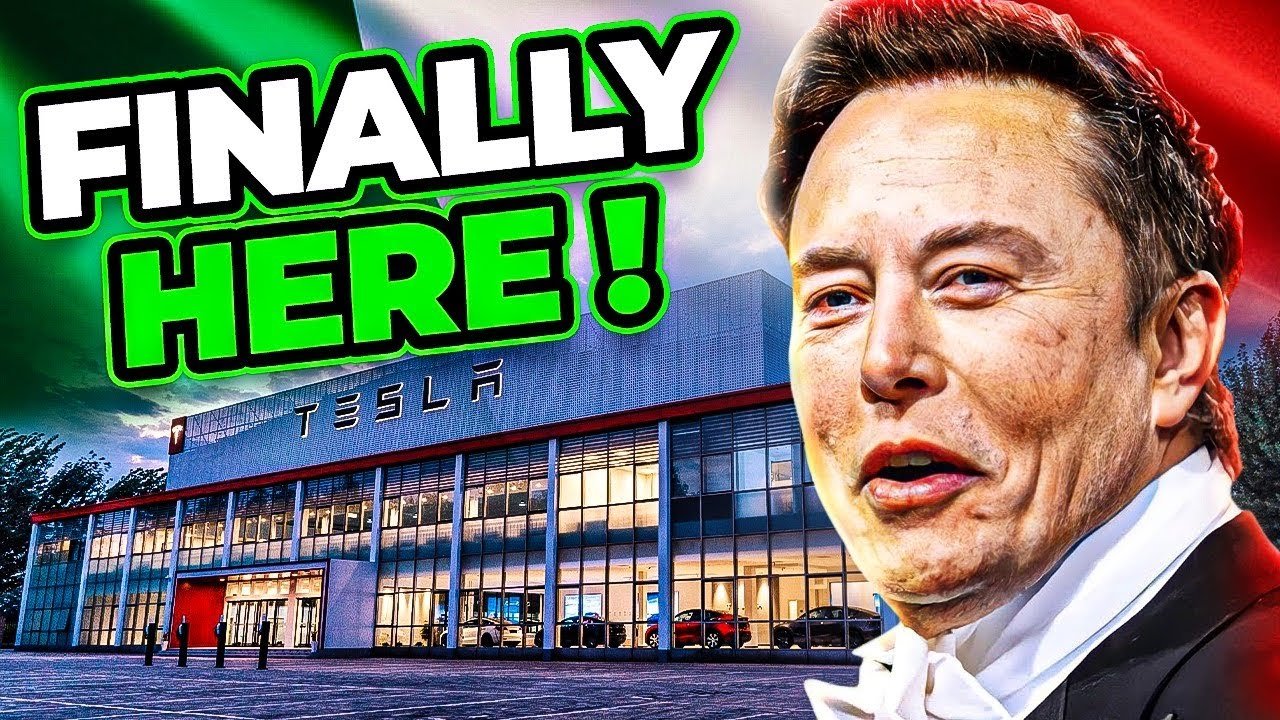 And with plans to build a $25,000 model car, a confirmed semi-truck, Cybertruck, and a second-generation Roadster, Tesla is constantly expanding. And the backbone of all of this is the Giga factories.

Now, in a formal request, Italy’s Minister of Infrastructure and Transport Matteo Salvini has encouraged Tesla to build a Giga factory in his country, which has a long and successful history in the vehicle industry.

So, will Tesla take on the offer? And what are the rumored next locations for Tesla Giga factories? Today we are going to look at how Italy’s Minister of Infrastructure and Transport, Matteo Salvini, is calling on Tesla to build a Giga factory in Italy.

So, stay tuned as we look into this. When they think of the company, most people first associate Tesla with its popular on-road vehicles, such as the Model 3. They may also think about how the company’s products, such as the Tesla Roof, are helping to drive innovation in the field of renewable energy.

It’s a novel idea with plenty of potential. Think of Tesla’s Gigafactory as the engine that propels the company’s overall production. According to Musk, it is a massive facility with millions of square feet of floor space and is responsible for “building the machines.”

If Tesla’s Gigafactory plan proves to be successful, the company is expected to see unprecedented growth in the years to come. Tesla Motors, the electric vehicle manufacturing company owned by Elon Musk, has emerged as a significant participant in the field of renewable energy.

The business’s Gigafactory plant in Sparks, Nevada, which spans more than 404 hectares (1,000 acres), was the biggest (physical) monument to the success of the corporation.

And a couple of years after the completion of the battery facility that holds the record for being the largest in the world, Tesla pushed on with plans to diversify by building a second factory that is quite similar to the first one in Europe.

Musk kicked off this quest in November 2016 when Tesla stated they would work together with the German technical firm Grohmann Engineering. In addition to manufacturing batteries, this second Gigafactory would also be responsible for producing electric automobiles.

Because Tesla’s objective is to establish an ecosystem of goods that use renewable energy, several European nations were interested in joining Tesla in this mission, so the firm continued to scale up its production speed.

As early as 2015, when Tesla searched for a location to construct its Gigafactory, at least five states, including California, Arizona, and Texas, competed for the project before the company decided to locate the factory in Nevada.

But why were countries so interested in Tesla’s Giga factories?

Well, for various reasons, including the expected investment of 5 billion dollars that Tesla would pour into the project and the number of jobs it would generate. It was projected that the Gigafactory would employ 6,500 people in Nevada by the year 2023, requiring locals to comprise at least half of that workforce.

The European nations were not left behind also. For instance, in 2017, the country of Portugal created a Facebook group titled “Bring Tesla Gigafactory to Portugal!” and the group garnered more than 20,000 members.

Also, both Spain and France presented Tesla with potential sites for converted power stations; therefore, it is probable that both countries continue to seek the company’s attention. Meanwhile, the Dutch were moving toward a more serious and authoritative approach.

Henk Kamp, the Dutch Minister of the Economy, stated to the Dutch parliament in December 2016 that the government will work to persuade Tesla to locate its Gigafactory 2 in the Netherlands because it would enhance the automotive sector in Noord-Brabant and other regions of the nation if it did so.

Musk, for his part, assured Europe that Tesla would very soon increase its manufacturing activities in that region. In the long term, there was little question that Tesla would have at least one facility for its vehicles and batteries in Europe, and maybe two or three.

And up to now, some countries are still pursuing Tesla. Most recently, Italy’s Minister of Infrastructure and Transport, Matteo Salvini, has publicly requested that Tesla consider the country as a possible place to construct a Giga factory.

During a webinar that was put on by one of the most prominent publications in Italy, Interior Minister Matteo Salvini referred to Elon Musk as one of the primary inventive minds in the world. In addition to this, Salvini shared his opinion that Tesla ought to increase the amount of money it invests in the Italian market.

He made it known that he wanted Tesla to locate its next Giga Factory in Italy since he considered it would be of significant assistance to the automotive industry in that nation.

In addition, the Minister assured Tesla that it would get the whole support of the Italian government. He made this guarantee while pointing out that the company had previously had a lot of difficulties in Germany.

One of the issues was that Tesla wanted to clear a “protected” section of the forest on the Giga Berlin construction project site so that they could construct it there.

And even though Tesla was ultimately approved, the legal procedure in Germany was drawn out and took several months to finish. Tesla has been selling automobiles in Italy since 2011, home to several hundred of the company’s Supercharger stations.

It would be very interesting to see which location is chosen for the next Gigafactory because, according to reports, numerous candidates are running for the position. Persistent reports have suggested that a Canadian Gigafactory will be developed near Montreal.

But why should Tesla even build more Giga factories?

When Tesla initially emerged on the market with their electric vehicles, the company’s primary objective was to prove that its automobiles could be high-end, well-made, and environmentally friendly simultaneously.

In particular, there was a rise in demand for the Model 3, which has been met with an almost unprecedented level of enthusiasm. As a result of the increasing demand, the wait times for a Model 3 might now be as long as three months or even longer.

In addition, the demand does not appear to be decreasing any time soon, based on the evidence gathered. In addition, Elon Musk presented the Tesla Cybertruck for the first time in November 2019, and the company has already received more than one million preorders for the vehicle.

Tesla needed a solution that made it possible to manufacture automobiles at a faster rate. And that’s where the Tesla Gigafactory comes in. These Tesla plants have all the equipment, tools, and facilities necessary to make any product or service the company provides for its customers.

This encompasses a wide range of products, including electric cars, solar panels, and lithium-ion batteries. Manufacturing is sped up by the Gigafactory, which eliminates the additional costs associated with shipping components to different locations for assembly.

And according to information provided on Tesla’s official website, the Gigafactory was to result in an increase in the production of batteries at a cheaper cost, which would, in turn, result in reduced prices for Tesla vehicles. Consequently, a greater number of individuals will be able to purchase a Tesla vehicle, which will lead to an even higher level of demand.

So, what are the rumored locations for Tesla’s next Giga factories?

When Tesla’s Giga factory in Shanghai greatly improved Tesla’s car output and stock value, it was easy to see why rumors about a second Chinese facility quickly arose. But on Twitter, Elon provided an excellent response to a query on the company’s plans to expand its plant operations in countries other than China.

However, for Tesla to begin providing service to the eastern side of North America, it must finish the Giga Berlin and a second US Giga.

Even though Elon Musk has stated that China is not going to be the next location for a Tesla Gigafactory, it is still a matter of conjecture as to where the building of such a facility would be best suited to beginners.

And then, following the aforementioned setbacks with Tesla’s Gigafactory in Berlin, the local authorities in Northern England made contact with Tesla in the hope that the company would consider constructing a Gigafactory in Teesside, United Kingdom. And that if the leaders are to be believed.

Tesla will not encounter any challenges or setbacks it is now facing in Germany, and construction could begin immediately. Despite the proximity to Giga Berlin, neither Musk nor Tesla has made any plans to expand their operations to the United Kingdom publicly known.

Given that Tesla has already significantly expanded its Gigafactory in Shanghai and has acknowledged additional development in Asia, it is more likely that another Gigafactory will be established in China, Japan, or South Korea. So, do you think that Tesla will consider Italy’s offer? And are the Giga factories a real game changer?

Thanks for reading till the end. Comment what your opinion is about this information:– “Giga Rome is Coming Soon! Is Elon Musk’s Next Giga Factory in Italy”