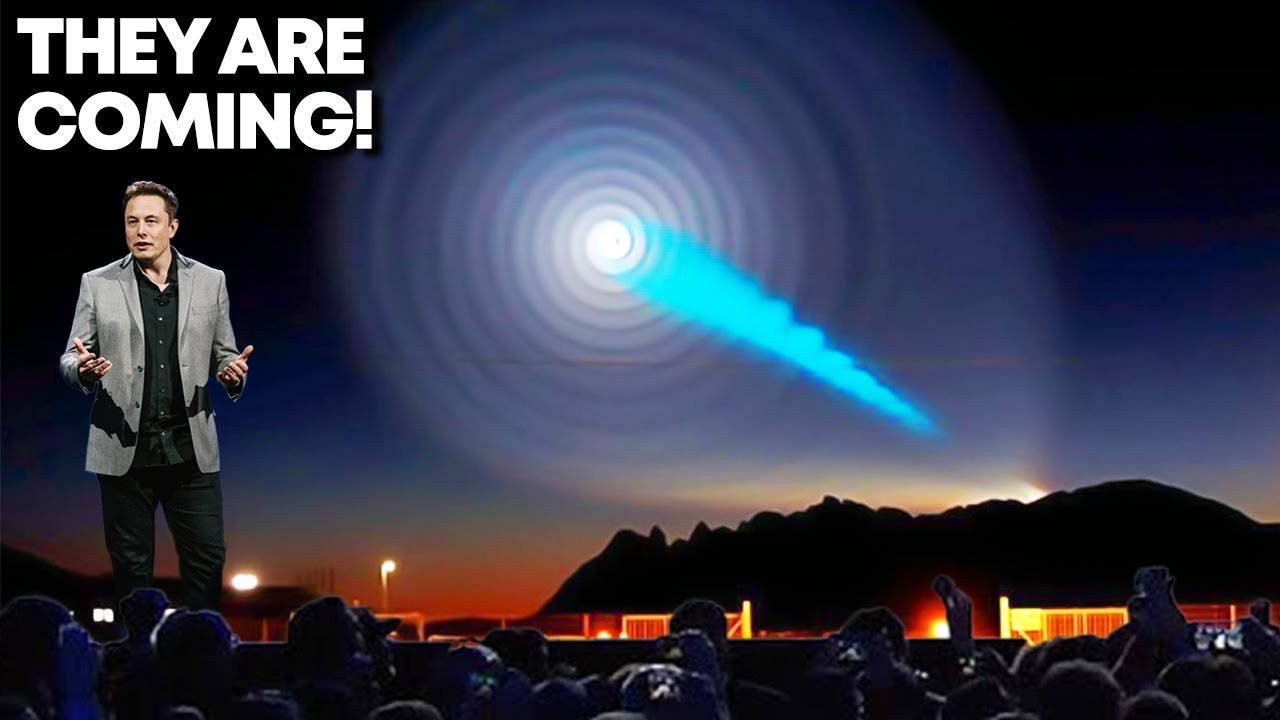 SpaceX Launch Discovered MYSTERIOUS Spirals of Blue Lights:- On the 19th of June, 2022, following a SpaceX launch of the Falcon 9 rocket carrying a Global DM 15 satellite, some residents of Nelson, a small city in New Zealand, found themselves looking at the night sky in awe and mystery.

Of course, they were unaware of the SpaceX launch, so to their minds, this was something supernatural, alien, or even divine! Keep reading to find out just what it was that they saw! SpaceX’s Launches are UNBELIEVABLE SpaceX, the company spearheaded by Elon Musk, boasts that it is the cream of the crop when it comes to the cosmonautic industry.

This claim is by no means baseless because SpaceX’s breakthroughs have constantly revolutionized the space race in the past few years. SpaceX is renowned for its brilliant rocket launches, which are covered extensively by media throughout the world, because these launches are a thing of beauty, both in their quality and their frequency.

It’s a testament to Elon Musk and his fellow engineers that we’re even able to talk about their rocket launches because as recently as just a few years ago, launches on this scale were just a fantasy. Elon Musk’s reaction to the Falcon Heavy Launch in 2018 shows how difficult these launches are and how much effort goes into making them a success.

However, sometimes, weird things happen during a launch, and this time, these weird things happened over the skies of Nelson, New Zealand. EERIE Discovery In The Night Sky Spotting odd lights in the sky is no new occurrence, seeing as the Northern Lights, found around Scandinavia, are a global attraction.

But what those people saw in Nelson, New Zealand were no Northern Lights. The spiraling blue light observed was something mysterious, and possibly seen for the first time in history. No wonder people thought it was aliens, that thing looks like it was artificially created.

The images sent tremors throughout social media, with astronomy groups on Facebook immediately suggesting theories that it may have been a U.F.O, an alien, or maybe even an angel. One thing is for sure though, no one can blame those people for jumping to conclusions, the human mind is wired that way.

Curiously, this wasn’t the first time one of SpaceX’s launches was accused of being the cause of a mysterious light in the sky. A similar thing happened in December 2017 in California, where a mysterious light appeared in the sky and the observing public was left dumbstruck.

Some kids were joking around that the cause of this light appearing as Santa Claus, and others were too stunned to assume anything. Mystery REVEALED SpaceX has been reported as the culprit for causing this strange phenomenon in the New Zealand sky, and while there are a few doubts here and there about the actual reason, most astronomical societies, particularly the New Plymouth Astronomical Society, have confirmed that the strange formation in the sky was most likely caused by a “fuel dump” or “exhaust plume” from a SpaceX rocket launch as a SpaceX rocket was indeed in the sky around Nelson, New Zealand around that time.

This explanation does check out and makes you wonder just how many of these fuel dumps we’ve missed. And if you’re wondering why a company as advanced as SpaceX would need to use fuel for their rockets instead of being powered by electricity or some other environment-friendly substance like Elon Musk’s other company Tesla is renowned for, Elon Musk has explained that the use of fuel is currently essential because of the problem of time.

Elon Musk has always claimed that humanity’s continued survival depends on it becoming a multi-planetary species, and he says that he’s working on solutions for humanity in the case of a catastrophe, and he’s working as fast as possible because he believes a catastrophe will happen sooner rather than later, which means that the use of fuel in SpaceX rockets is crucial.

While electric-powered rockets may well come to fruition in the future, the technology for it is simply not there yet, which is why, rather than sit around waiting for technology to develop, Elon Musk has decided to use fuel to get results and advance his plans as quickly as possible.

Elon Musk Wants To Go To MARS Elon Musk is a firm believer that for humanity’s continued existence, it has to take the next step – perhaps the biggest step ever taken. He aims to colonize Mars by 2050. This sounds like the plot of a sci-fi movie, but it’s all true. If anyone can do it, it’s Elon Musk and SpaceX. With the Starship, and eventually the Starship 2.0 plan, he hopes to send 1000 people to Mars every launch.

His projects surrounding the Mars plan have advanced rapidly during the last two or three years to the point that he says that he has a 70% chance of setting foot on Mars himself. He claims that there have been significant breakthroughs and believes that moving to Mars will be a feasible and cheap option, as low as $100,000.

If Elon Musk’s Twitter is anything to go by, we know the man is confident as they come, and if he believes he’ll make it happen, then who are we to doubt him? He’s proven us all wrong before. If SpaceX continues to work on the Mars plans at the pace it is already going at, we can be sure to see even more creepy lights in the sky as a result of fuel dumps from their launches.

Speaking of Elon Musk’s Twitter, it is perhaps the most bizarre platform on the internet. Elon Musk’s Thoughts on BIZARRE Spiral Light Anyone following Elon Musk will know that he relishes the attention of the media and loves it when his companies are in the spotlight.

He loves garnering the attention of the public by sending out a meme tweet on a trendy topic. The same was the case when the strange light appeared as a result of the SpaceX launch in December 2017. Elon Musk took to Twitter and jokingly said that the light was caused by a Nuclear Alien U.F.O from North Korea.

While there’s no exact record of what Elon Musk thinks about the light seen in Nelson, New Zealand, we can be sure that he is delighted with the attention he and SpaceX are getting, and this situation probably got a good laugh out of him. His nature has always been to find the funny side of things.

He has always been intrigued by phenomena in space, and weirdly enough, has always had a soft spot for the debate about aliens. He has always wondered where the aliens have been throughout history and are curious that he hasn’t run into one in all his time working in the space industry, causing him to suspect that aliens have been among us this entire time. He could be right, he could be wrong, we can’t know for sure.

But what we can know for sure is his thoughts on the Falcon launch that caused the weird light in the sky. Falcon 9 Is INCREDIBLE Elon Musk takes a lot of pride in SpaceX and considers the company to be his crown jewel. One thing SpaceX is renowned for, other than its magnificent Starship (at Starbase) is its Falcon Rockets, particularly the Falcon 9, which is a partially reusable rocket, capable of landing vertically.

It was the first rocket designed by SpaceX to be capable of reusability, first doing so in 2015. In June 2022, the SpaceX Falcon team managed the impressive feat of completing three launches in two days, which earned them personally and public congratulations from Elon Musk on Twitter, showing the fact that Elon Musk keeps the Falcon project extremely close to his heart.

What’s even crazier is that Falcon 9 has been remastered and improved to create the Falcon Heavy, which has the honor of officially being the world’s most powerful rocket. Falcon Heavy has also been responsible for creating creepy lights in the sky, so we can rest easy knowing that we’ll get a brilliant light show every once in a while.

Jokes aside, the Falcon Heavy, debuting in 2018, has changed space travel as we know it, and will continue to do so. Elon Musk himself has said that this is his most powerful creation, and that giant rockets like the Falcon Heavy are the way to go, claiming that the government and other entities are making a mistake by developing smaller rockets.

He is not afraid to call the government out on anything. The government is at its feet for its SpaceX technology because it sees the brilliance and potential that lies within. SpaceX Is A Part of WARS Elon Musk is finding himself in growing power by the day, with even the US Pentagon contacting him for help.

Elon Musk enjoys his association with the military and even gave a candid interview in front of the US Air Force, showing that he is comfortable doing so. He jokingly gave a message to the audience that they should collaborate to create a US Space Force, called Starfleet, and too much laughter and applause from the crowd. This shows he’s well received by those in power, and this was confirmed when SpaceX was contracted by the government to help it in wars by transporting military cargo around the world using a rocket.

This is a five-year contract, and its timing couldn’t be more perfect. With the world plunged into the Russia-Ukraine conflict, in the middle of which Elon Musk personally challenged Vladimir Putin to a fistfight, the US finds itself in a position where it requires the services of SpaceX.

Being an ally of Ukraine and being loaded in terms of military hardware, the US finds itself requiring the assistance of a company to send aid to Europe and who better to do so than SpaceX and Elon Musk? SpaceX will use the Falcon Rocket to transport these goods to wherever they are required in less than 30 minutes! Technology is being pushed so far by SpaceX that the fact that rockets can travel around the world in half an hour isn’t even the most mind-blowing part! SpaceX has done something even more special.

Reusable Rockets Are The FUTURE In the past, the cosmonautic industry was rightfully labeled as being too wasteful, as all companies involved were building rockets for months for just one launch, only for it to fail, and they’d just be back building a new rocket again.

This was simply not feasible in the space race, and when SpaceX made the all-important historical breakthrough of successfully creating a reusable rocket that came back from outer space to the launch site, everything changed. Suddenly, all plans regarding outer space travel were met with optimism and genuine planning, rather than being cast aside as a pipe dream.

The saving on costs alone has made everything manageable and allows passionate and skilled engineers to make their dreams a reality. A lot of credit for this goes to Elon Musk, whose persistence to make this happen was ESSENTIAL, otherwise, his dream to one day reach Mars would have stayed just that – a dream. Now, as technology grows at an even faster rate, maybe the human race can aim even farther than Mars, perhaps another Solar System! Elon Musk and SpaceX have completely changed the game.

Thanks for reading till the end. Comment what’s your opinion about this information “SpaceX Launch Discovered MYSTERIOUS Spirals of Blue Lights.”