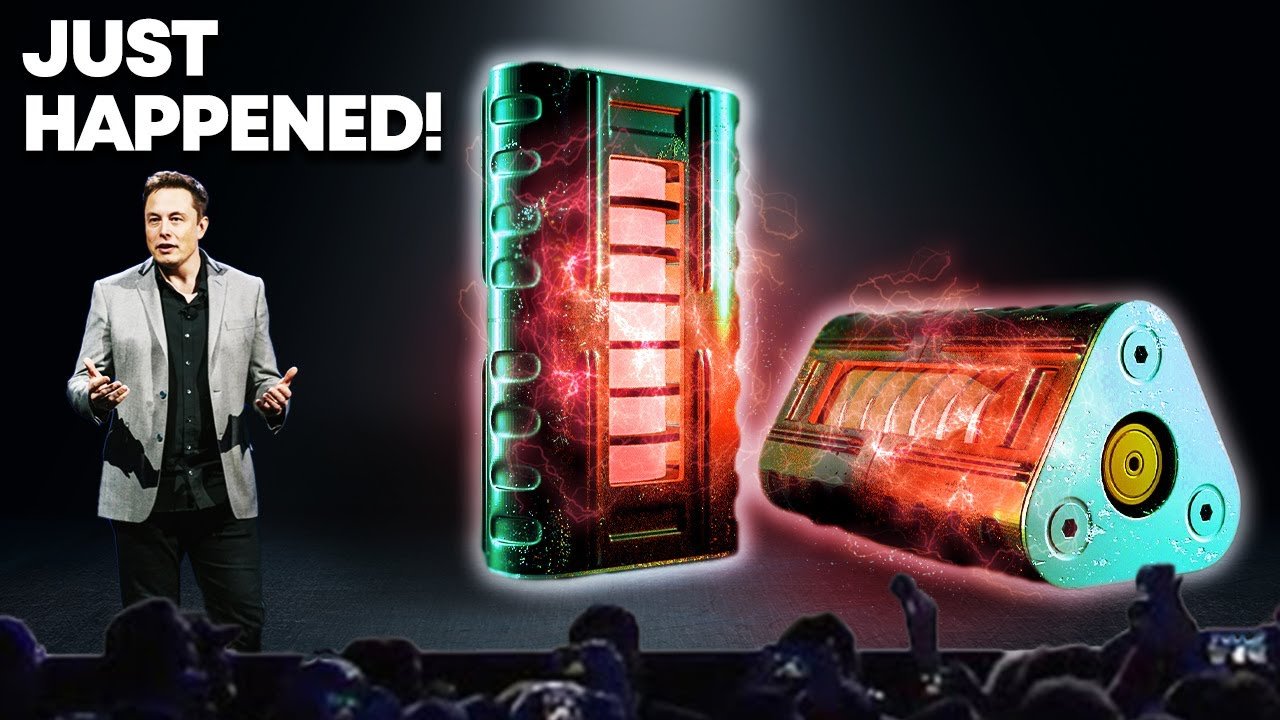 Scientists Are SHOCKED By Elon Musk’s Cheapest Battery. Why? Elon Musk is back with yet another upgrade that has shocked scientists! The Tesla CEO almost single-handedly revolutionized the automobile industry with the introduction of EVs.

But having watched the inadequacies of lithium-ion batteries slow down his biggest invention, Musk is teaming up with the world’s leading experts on battery technology to develop a new power pack that will solve the worrying battery issues in EV cars.

According to the fact sheets released by Tesla, this battery will be more efficient, sustainable, and have a lifespan of 100 years, which would be a massive upgrade on the current Lithium-ion batteries that are used in electric cars.

The High Price of Conventional Battery As one of the pioneers of electric vehicles, Elon Musk remains committed to optimizing the components that power them. This time, the tech billionaire is focused on improving the technology behind the lithium-ion battery, which is one of the most important components of EVs.

The very first disadvantage of lithium-ion batteries is that they’re overpriced. According to reports, batteries are the most expensive components in electric cars. And they’re becoming even more expensive by the day.

Automakers have watched helplessly as the price of lithium-ion batteries spiral through the roof in the last couple of months. Prices surged from $4,450 per tonne in 2012 to around $17,000 in 2021.

But shockingly, the price per tonne of Lithium Ion batteries has since risen by around 500 percent to over $78,000 in 2022, representing the biggest price rise in more than twenty years and a significant bottleneck for carmakers who also have to deal with the global chip shortage.

Commenting on the issue, Musk described the new prices as “insane.” The billionaire doesn’t seem to understand why Lithium Ion batteries have become so expensive because according to him the raw material that is used to produce them are everywhere.

“Lithium is extremely plentiful, it is one of the most plentiful things on Earth. It is not rare at all.” So why then are lithium-ion batteries expensive? A typical lithium-ion battery has two electrodes. Namely the cathode and the anode.

The anode is made with graphite which is significantly cheaper than the cathode, which makes up for 50 percent of the cost of the battery. This reason is that cathode is made from expensive elements such as cathode, nickel, copper, and cobalt.

Also, in recent months, the global economy has been under the squash of unprecedented inflation that we haven’t witnessed in several decades. This has impacted the prices of every piece of the commodity in the market and of course, lithium-ion batteries are not exempted.

Furthermore, the demand for electric vehicles has been so overwhelming that manufacturers of Lithium-ion batteries are unable to keep up. However, Elon Musk has chosen to examine the situation from another angle, suggesting that the extraction and refinement pace is too slow.

Actually, this is a problem that extends far beyond the confines of the automobile industry. The lithium-ion batteries that power electric cars are the same as the ones that power our smartphones and laptops with. This means Tesla is not the only company feeling the heat of the unreasonable price increase.

Other manufacturers such as Apple and Samsung are also feeling the heat. But Tesla’s resolve to equip its cars with the highest quality of batteries means it is more affected by the situation. Additionally, lithium-ion batteries add to the weight of electric cars.

The 50-kilowatt hour battery in the Tesla Model 3 weighs 1,060 pounds. That’s almost half of the weight of the car itself. And this is another reason why Musk is hell-bent on upgrading the battery.

A Long-Lasting Solution To The Problems Musk’s resolve to upgrade the technology of lithium-ion batteries has become paramount given the planned introduction of the Tesla semi-truck. The truck will have a maximum payload capacity of 3,500 pounds and a range of 400 kilometers.

These features will place the new Tesla truck in direct competition with the heavy-weight diesel-powered trucks.

Musk knows pretty well that a more efficient battery pack will be needed for this truck to be able to stand the test of time and that’s why he is in the process of developing a new battery that will have Lithium and Sulphur in it.

And unlike the conventional lithium-ion battery, this new power pack will function without a cathode.

When invented, this battery will also put an end to the price and weight problems of rechargeable batteries, which are two of the most significant issues that limit lithium-ion batteries. Elon Musk is a natural go-getter.

He’s renowned for taking on difficult challenges, and more often than not, he ends up achieving and surpassing his goals. So, you wouldn’t bet against him getting this one done as well.

Features Of The New Battery Elon Musk hopes to beat down the cost of producing car batteries by 50 percent while significantly increasing their efficiency, sustainability, and density. By our calculations, if everything goes as planned, this new battery could potentially reduce the price of Tesla electric cars by up to 25 percent.

But, we should also emphasize that this is not going to be an easy task. Musk understands this himself, and that’s why he has decided to team up with Jeff Dahn, a Professor of Physics and Atmospheric Science at Dalhousie University in Canada and one of the earliest pioneers of lithium-ion batteries.

Dahn has been researching ways to improve the density of batteries, and he’s already compiled quite a number of patents and papers for Tesla on battery density.

The paper suggests the use of nickel in the battery composition as a way of increasing the density. And we know quite well that a higher battery density automatically translates to a longer driving range for electric vehicles.

Before now, scientists have combined nickel with cobalt in batteries. However, cobalt, like lithium, is also suffering supply chain issues. That wouldn’t be a worry, though, because scientists have recently discovered that batteries can actually function at a premium level with low or no cobalt.

But that wouldn’t be the only advantage of this battery. Jeff Dahn also claims in his paper that the new Tesla battery will be more durable than the existing batteries, even when charged at varying temperatures.

Theoretically speaking, the battery could maintain an average temperature of 25 degrees at all times and could last for as much as ten decades.

Seeing the importance of these new findings and the benefits it holds for the production of electric cars, Elon Musk has extended the cooperation between Tesla and Dahn’s group until 2026.

According to reports, this battery will be aesthetically better than the current batteries. This power pack should measure four feet in height and three feet in width.

It should have a depth of around 7 inches. It is expected to deliver five times more energy and six times more power than the existing batteries as well as a storage capacity of 380 Watt-hour per kg.

In terms of charging, the revolutionary battery will need only 30 minutes max to recharge from ten to 80 percent, which is a huge upgrade on the recharging technology we have right now. And to cap it off, it will offer up to 1500 charge cycles for a range of between 300 to 500 thousand miles.

But while the development process is ongoing, Tesla is making efforts to ensure that it has enough batteries to produce cars at the required pace. Tesla generally relies heavily on Panasonic for its batteries, however, the automobile company has started producing batteries in-house at different gigafactories.

Currently, the most premium and largest battery model built by Tesla is the 4680-type, which recently entered the market. This model solves some of the issues that we discussed in this video.

However, it has some limitations as well, but of course, it will definitely serve for a while until Elon Musk delivers on his promise to develop and introduce the all-new cheaper, and more efficient Tesla battery.

Thanks for reading till the end. Comment what your opinion about this information:– “Scientists Are SHOCKED By Elon Musk’s Cheapest Battery. Why?”