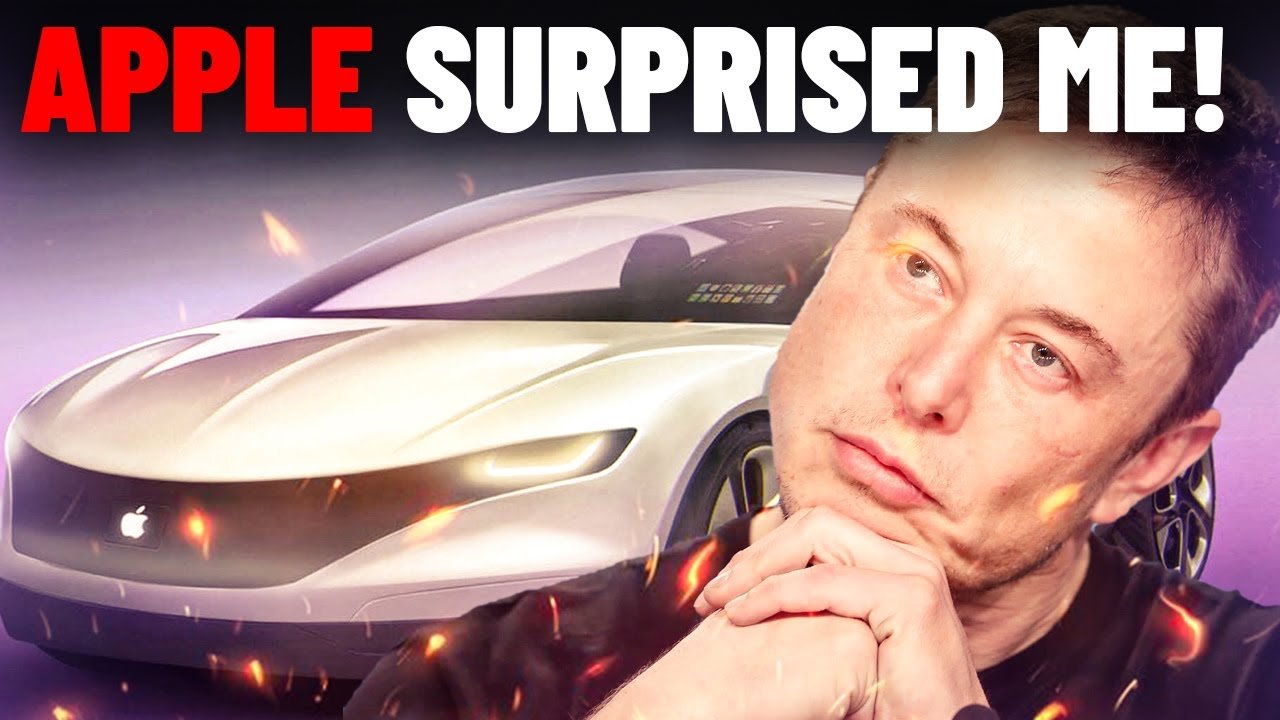 Elon Musk’s Reaction To The Apple iCar Impressive:- When it comes to the future of transportation, everyone is looking toward Elon Musk and Tesla. But what about Apple? Reports are surfacing that the tech giant may be working on a car of their own.

Let’s hear what Musk had to say about this – So Elon Musk welcomes the competition. But doesn’t Apple have a reputation for top-notch design, engineering, and manufacturing? Further, Apple has invested a lot of resources and manpower in its electric car project. Why isn’t Elon Musk worried?

First, let’s look at Apple’s electric vehicles project. So around 2008, Tesla was debuting its first few electric cars, Steve Jobs was inspired by the success of Tesla in this field, and he started to discuss plans to make an Apple car.

Apple then set in motion plans to design and build a car. But the project was delayed a bit, and it was only in 2014 that Apple CEO Tim Cook approved the project. They then hired a former Ford engineer Steve Zadesky to head the development team, as well as other experienced hands in the automobile industry like Johann Jungwirth from Mercedes Benz.

This Apple electric car project was christened Project Titan, and development was underway. Though Project Titan was shrouded in secrecy and Apple hasn’t shared details about the progress they’ve made, here’s what we know.

Between 2014 and 2018, Apple went on a hiring spree, and they assigned at least 5000 employees to Project Titan. In January 2018, the company registered 27 self-driving vehicles with California’s Department of Motor Vehicles.

This grew to 66 driverless cars, with 111 drivers registered to operate those cars. Soon rumors began to circulate of a partnership between Apple and giants like Volkswagen, Nissan, and McLaren. But all these rumors subsided after news that Apple’s self-driving cars were involved in a crash. Soon enough, there were lay-offs, and around 200 people lost their jobs.

Then we come to 2021, and again speculation regarding the Apple Car began to rise. Media reports tell us that Apple was close to a 3.59 billion dollar deal with Hyundai to use its Kia Motors West Point, Georgia, manufacturing plant for the Apple car. However, this deal did not materialize.

Soon enough, Apple analysts started to speculate that the Apple Car project team “has been dissolved for some time.” Further, they also said that Apple would need to reorganize the team within the next six months if it wanted the car to hit the market by 2025.

Now it does not seem like Apple is any closer to production. This is one of the drawbacks of keeping a project completely under wraps for too long. We don’t know if Apple plans to spring a massive surprise on us in the near future with an Apple iCar or whether this project has been shelved.

Now let’s look at the five reasons why Elon Musk is not worried about Project Titan. First, there is the time factor. So Tesla started development in the early 2000s when EV technology was at its nascence.

Within a few years, it had products on the road, and it brought EVs to the forefront as a viable rival to internal combustion engine vehicles. Tesla now has multiple lines of vehicles ranging from the top-of-the-line Model X to budget options like the Model 3 and the Model S. It is also developing the Cybertruck.

Apple’s electric vehicle project has nothing to show for on the other hand. It has been in development for the past 14 odd years, and we still don’t have a prototype. All we have are rumors and speculation by industry analysts.

Now other vehicle manufacturers like GM, Volkswagen, and Mercedes have also entered the EV market and have started manufacturing their own electric vehicles to compete with Tesla. At present, Apple does not have any facilities capable of manufacturing EVs.

Further, Apple has limited experience when it comes to the manufacturing sector. Its phones, tablets, and accessories are manufactured by companies like Foxconn. Apple tends to subcontract its manufacturing. So they would have trouble setting up these kinds of facilities on their own.

In addition, other automakers would be unwilling to lend their facilities to Apple. After all, why would you want a new competitor to enter the market? This is probably why the 2021 deal with Hyundai to manufacture Apple vehicles at its plant in West Point, Georgia fell through.

The third reason why Elon Musk is not worried is that other manufacturers are probably wary of Apple due to its business practices. So in 2004, Apple partnered with Motorola and other mobile handset manufacturers to make its iTunes software available on their phones.

But in secret, Apple was developing its own smartphone, and it decimated competitors like Motorola, Nokia, and Blackberry. At present, automobile giants have the same fears. They feel that giving Apple insights into the manufacturing process or developing vehicles in partnership with Apple could give it valuable information and expertise.

At number four, we will talk about why Apple’s design philosophy makes no sense in relation to the automobile sector. So Apple’s core philosophy over the past decade has been to make thin devices. Every year the company boasts about how it has been able to shave a few millimeters from its products.

These developments are great feats of engineering, but it is completely out of place in the automobile market. People like vehicles with leg space. They want to store their suitcases, bags, and prams on long journeys. They want a car big enough for their family and pets.

So Apple will have to find a new sales pitch if it wants to become a serious player in the EV market. Making the car smaller or gimmicks like bezels and multiple cameras will not be enough to make it in the highly competitive EV market.

In addition, Apple is known for puzzling decisions like removing the headphone jack from its phones or deliberately throttling its phones to maintain performance over years of use. This reputation may discourage potential customers.

Lastly, Elon Musk doesn’t have any issue with Apple joining the EV market because he believes that more competition will spur development in the EV field. It will ensure that companies don’t become complacent or stagnant.

Musk is confident about Tesla’s engineering and manufacturing capabilities. He tends to look at things from a larger perspective, and for him, electric vehicles will reduce our reliance on burning fossil fuels, and this will reduce pollution and probably save the planet. Further, there are quite a few people who only use Apple products, whose lives are integrated into the IOS ecosystem.

If an Apple car could convince them to buy an EV, Elon Musk would probably be happy that they have decided to be environmentally responsible. On an unrelated note, Apple is known to hire Tesla employees who were laid off or just poached employees from Tesla.

Elon Musk believes that “Most big companies in tech have turned into places where talent goes to die.” So companies like Apple would be a lovely retirement home for Tesla’s ex-employees. Now let’s talk about what Apple Carplay is. Apple Carplay is a system that connects your iPhone to your car.

Then CarPlay allows you to access the apps on your phone on your car’s infotainment display. So this means it is possible to navigate, call, text, or control your music while driving. However, CarPlay does not work with iPads or iPods, and you can’t use it if you have an Android phone.

Google has a similar offering called Google Auto for Android users. Teslas come with their own premium connectivity services. Apple Carplay is not revolutionary in this regard. At present, companies like Mercedes-Benz, Porsche, and Nissan offer Carplay support. But these companies will be wary of handing too much control to Apple.

At present, Carplay is a feature that companies use to attract iOS users. Now you may be wondering why? Well, right now, it is just an external display for your iPhone. While you can receive a call, you can’t adjust the temperature or activate cruise control on Carplay.

Future versions of CarPlay will include these features, including the demo that was shown at the 2022 Worldwide Developers Conference. But right now, it is rather basic. On the other hand, Tesla’s vehicles come equipped with consoles that allow you to control almost every aspect of your car, right from performance levels to the radio.

And that’s a wrap. Do you think the Apple Car will be a threat to Tesla? Should Elon Musk be worried about it? Let us know your thoughts in the comments.