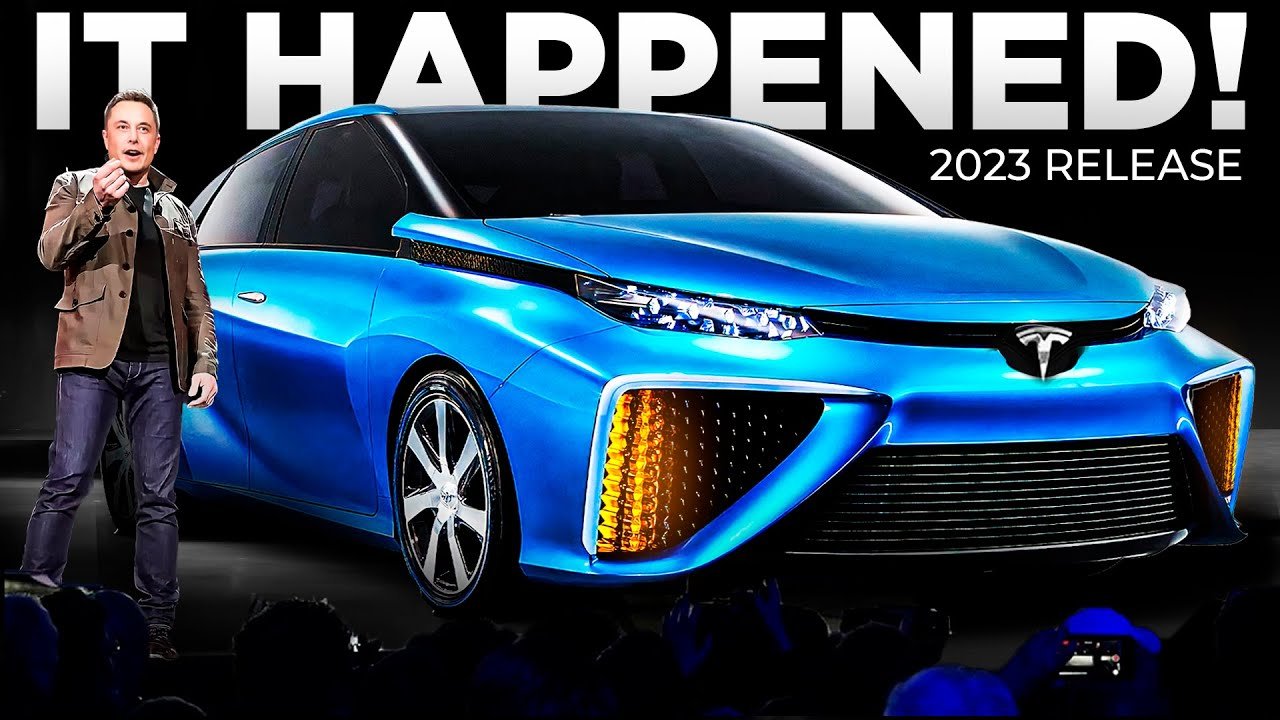 You hardly get all that from many CEOs these days. Tesla deserves all the worldwide recognition it gets because it is set to revolutionize the global car industry and the transportation sector as we know it.

Tesla wants to shock its competition by introducing a new product which would be the cheapest car from its stables. This new product is known as the Model 2. Join us today to look at Tesla’s newest offering and discuss how it will affect the EV market globally.

Tesla has done well for itself. Since it launched the first Tesla Roadster in 2008, we have gotten a pair of saloons, a seven-seater, and a small SUV. We also have the out-of-this-world Cybertruck and the beautiful all-new roadster on the way.

During Tesla’s 2020 Tesla Battery Day conference, Elon Musk confirmed that it will be producing a hatchback, which will debut as the smallest and comfortably the cheapest Tesla yet.

This hatchback should be the perfect American alternative to the German Volkswagen ID3. This hatchback, known as the Model 2, is projected to be the best-selling electric vehicle to date due to its low price entry point, exciting contemporary features, and improved performance.

Why are so many people excited about the arrival of this new model from Tesla? Developing new technology is an expensive process. Consumers only get to see the final product, not the huge amount of money, expertise, and time that has been spent on development.

Electric vehicles are relatively still new, the technology has been around for quite a while, but they only became mainstream and conventional some years back, thanks to Tesla.

It is challenging to convince people that electric cars are viable alternatives to cars with internal combustion engines. About 14 years ago, Tesla’s first car, the Tesla Roadster, went on sale.

People doubted its success because electric cars were perceived as small, terrible, and impractical due to short-range and long recharging times. But Tesla impressed the world by offering a car with 200 to 250 miles on a full charge and a charging time of 3 and half hours using a 240-volt connection.

The first Tesla Roadster was fantastic, but it was pricey. It was priced at 100,000 dollars, which is around 125,000 dollars today. The components of electric cars were costly back then, so Tesla had to sell its cars for a lot of money to not go under due to the financial crisis.

Since then, the technology for electric cars has been proven, parts are getting cheaper, and Tesla can start selling its cars at a lower price. Tesla made a massive change with the arrival of the Model 3 in 2019. At launch, the cheapest Model 3 sold for $35,400.

Now, due to circumstances beyond Tesla’s control and supply chain issues, the price of the Model 3 has risen to $39,990 before any subsidies or potential savings are taken into account.

Right now, it is the cheapest car in Tesla’s lineup, at least before the Model 2 debuts. When the Model 2 arrives, the price drop wouldn’t be the only new thing about it.

The new hatchback will have a battery design that’s more powerful, safer, and cheaper, thanks to its new tabless design that uses a new kind of connector to join the individual cells together.

This battery design is 35 percent smaller than conventional batteries which can store and release more electrical energy with less risk of overheating and catching fire.

Tesla says that the new hatchback will have a 16 percent more range per kilowatt-hour battery due to these new cells. This means that even if the new Model 2 battery pack is half the capacity of the one in the Model 3 Standard Range Plus, it should manage about 160 miles on a full charge.

In contrast, the entry-level Fiat 500, which costs approximately $31,000, has just 116 miles of range. The new Tesla would be $6000 cheaper than the Fiat 500 while looking more stylish and having about 30 percent more range.

Tesla also plans to use the Model 2’s battery as a structural part of the car’s construction. This would make the hatchback lighter and stronger because the batteries are an integral part of the car and are doing some work to support the car’s underpinnings, not just add extra weight.

Tesla plans to sell new versions of the Model Y that uses the same battery design as the Model 2 in 2022. The Model 2 sports a revolutionary design; it would have a 10 percent mass reduction and use 370 fewer parts for its battery.

The Model 2 will be easier to produce, and it will use less material than other cars in Tesla’s lineup. The 10 percent mass reduction will help increase the range of the car by another 14 percent.

So, the range could increase from about 160 miles to 180 miles. What does all this mean for performance? Should we expect the Model 2 to be slower because it’s cheaper? Well, Tesla doesn’t do mediocre or unsatisfactory.

The car company will probably use an electric motor in the Model 2 to keep the cost down. Still, the single motor is no slouch either. The Model 3 Standard Range Plus uses only one motor, but it can go from a dead stop to 60 mph in 5.3 seconds.

That’s about half a second quicker than the Honda Civic Type R. The Model 2 will be lighter than the Model 3, its motor has less mass to move around, and it’s sporting new high-tech batteries, so it could be faster than before. Model 3.

We might be looking at something in the four-second range. Musk has confirmed that the new hatchback will cost only $25,000, which is less than half the price of the Model 3 standard range Plus.

Other carmakers have also tried to introduce affordable electric hatchbacks, but none can compete with the Model 2. The Nissan Leaf hatchback costs $31,670 if you don’t qualify for federal credit.

That price only gets you the basics. A model with all the trimmings, including Nissan’s ProPilot driver assists, costs about $44,920 before incentives, roughly the same as a Tesla Model Y.

Like the Model 3, we should expect different versions of the Model 2, including a fully autonomous version. Tesla is testing a beta version of its fully self-driving technology that costs around $10,000, but the price could drop when the Model 2 is launched.

We just can’t be sure. Tesla has always maintained a consistent consistency across all of its cars. The Model 3 and Model Y is priced lower than the Model S and Model X, but they offer many of the same features that these costlier models offer.

The range might not be as good, and you might not get that pesky mode that gives you mind-boggling acceleration, but you get that Tesla feels from every car in Tesla’s lineup.

All Tesla cars are built to provide the same driving experience. From the upholstery to the infotainment system, Tesla tries to ensure that no matter how much you paid for your car, you get the same experience in any of their cars.

Even full self-driving is available on cheaper cars, and we expect it to be available on the Model 2 if you can afford it. Expensive models may get new updates first or get more features like AAA gaming or yoked steering wheels, but they’re all still Tesla cars.

While Tesla plans to bring its starting price down to $25,000, analysts expect the price of electric vehicles to drop even further. The Model 2 is expected to be released in 2023; It will be built and designed at Tesla’s new research and development facility in Shanghai.

The new facility in Shanghai will be Tesla’s first outside the United States. Musk has claimed that the Model 2 will be made in Chinese style. It has begun accepting design submissions for Model 2 from qualified candidates, and it has been hiring for its production since last summer.

The Model 2 would be manufactured and exported overseas. This was verified by Tesla President Tom Zhu in China. In an interview with Chinese state media.

Tesla has said the Model 2 will be released in 2023, but many are skeptical because Tesla is notorious for not meeting release dates. Tesla still has plans like the Cybertruck, Roadster, and semi-truck it has yet to release.

In a meeting held in August 2021, Musk said that construction of the new $25,000-dollar Tesla would begin in 2023. According to Twitter sources, the Model 2 prototype is finished, and a test production date has been set for 2022.

Tesla posted a poster image of the Model 2 in 2019 with no steering wheel or pedals. Unfortunately, it looks like Model 2 development has taken a backseat as Tesla focuses on developing its hardware 4.0 for its fully self-driving technology. It’s unlikely we’ll see the Model 2 in customers’ garages before 2025.

Thanks for reading till the end. Comment what your opinion is about this information:– “Elon Musk’s CHEAPEST Tesla Car SHOCKS The Competition!”