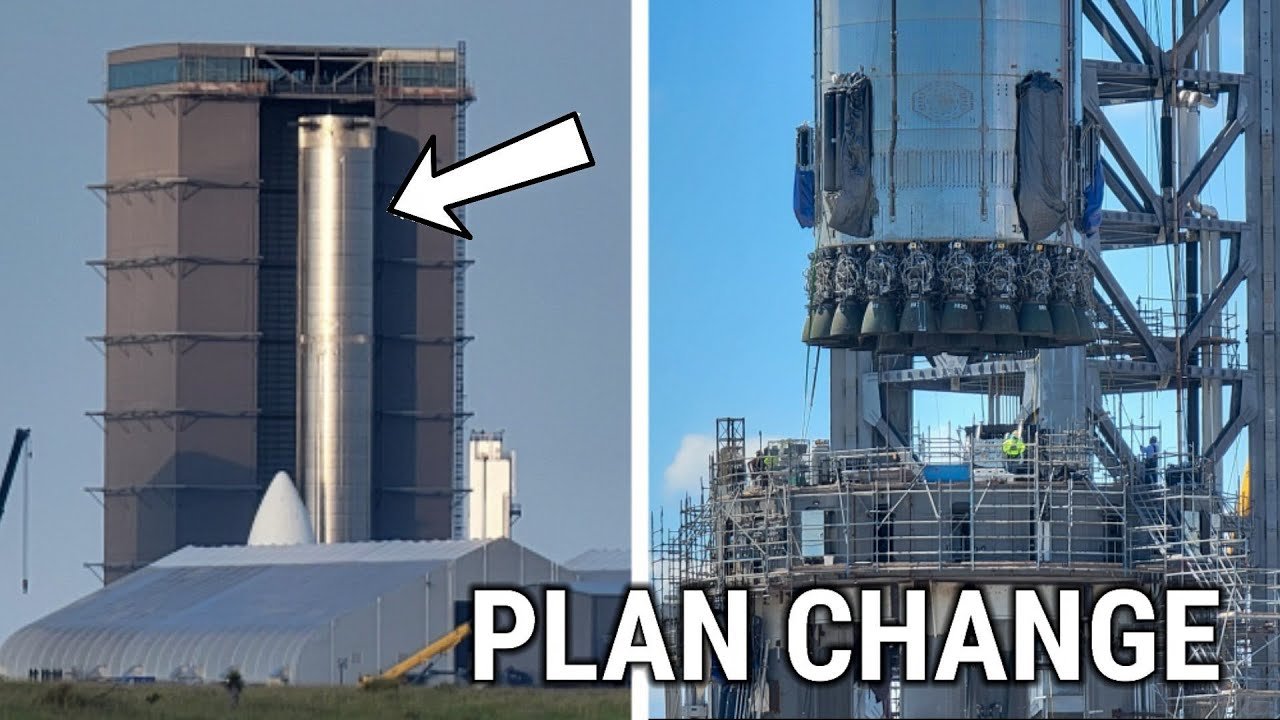 Elon Musk Just CHANGED The Plan On Booster 7 For Upcoming First Orbital Flight. Why?:- SpaceX huge Starship rocket for eventual trips to the Moon and Mars could go orbital for the first time in just a few weeks from now if all goes according to Elon Musk’s plan.

Immediately this flight’s becoming the focus of the whole world’s attention. With two hundred countries and thousands of newspapers reporting on the launch, well, this isn’t the first time. So this leads to some.

Revealing a surprising amount about the near future of the next-generation rocket program, in a short tweet. Join us as we bring you, Elon Musk just changed the plan for the starship’s first orbital flight.

While simultaneously setting some reasonable expectations about the likelihood of success. First publicly unveiled in September 2016, the fully-reusable, next-generation rocket that eventually became today’s stainless steel Starship, was tentatively scheduled to begin orbital flight testing in 2020.

About two years after that first announcement, CEO Elon Musk unexpectedly sacrificed years of development work on Starship structures. When he decided to replace the rocket’s carbon fiber composite airframe with stainless steel.

Years later, it’s still hard to say if that decision was the right one, but Starship development has been surprisingly unperturbed, by such an immense last-second design change.

Less optimistically, his August 2nd tweet also implies that he wouldn’t be surprised if it takes SpaceX a year, and multiple attempts, to achieve Starship’s first successful orbital launch.

It’s even possible to interpret his tweet as a warning, that Starship’s first orbital launch – while more likely to be successful – could be up to 12 months away.

Somewhere in the middle 4-8 months from now, is a more reasonable bet for Starship’s first successful orbital launch. As of early August, no aspect of recent Starship or Super Heavy booster testing is particularly encouraging, for a hypothetical September launch attempt.

Super Heavy Booster 7 is still in the middle of repairs after surviving an accidental explosion. Yesterday Elon Musk shares a glimpse of super heavy booster 7 returning to the launch site for an upcoming static fire.

This time SpaceX try to test the outer ring 20 raptor engine rather than the 33 raptor engine simultaneously. Booster 7 looks good for testing, maybe all repairs have been done and Booster 7 is on the launch site.

Starship 24’s latest round of testing – while not yet destructive – has been sluggish. However, in line with SpaceX’s strict focus on maximizing the speed of Starship development, and shortening the path to orbit.

The company has frequently built Starship hardware, before firmly assigning that hardware to any given ship, booster, or tank. In other words, until SpaceX begins stacking multiple completed rocket sections, there’s always a degree of uncertainty about the fate of any given ring, dome, or tank barrel.

First, let’s look at the aspect of SpaceX.This flight is considered to be a huge new development step for the company. The orbital flight is the first time that SpaceX has produced a full-size prototype, with two integrated parts together.

Starship and Super Heavy will be nearly one hundred twenty meters tall, when stacked for launch, it’s the largest monster on the planet ever built, simultaneously with this mission. Unlike the flight test, the altitude is only about ten kilometers above sea level at current.

This is a flight that’s considered a new leap for SpaceX. Second, the starship’s first orbital test flight, though audacious and scale, will have the task of providing a rich source of data for further trips in the future.

Mars, SpaceX intends to collect as much data as possible. During the flight quantify entry dynamics and better understand, what the vehicle experiences and a flight regime, that’s extremely difficult to accurately predict or replicate computationally.

This data will anchor any changes in vehicle design or conception of operations, after the first flight and build better models for them to use in internal simulation. Third, this orbital flight will help SpaceX solidify its lead in the space race.

Previously, people knew that SpaceX was famous for its Falcon nine, which is a partially reusable rocket, that has saved a lot of money and time for the company with every launch.

However, seeing some limitations that Falcon Nine could not bring to the company, they decided to build another line of rockets more powerful, larger scale, able to achieve the dream of bringing Elon Musk returned to his planet Mars as everyone.

Yokes, if Starship succeeds, SpaceX would further solidify its lead in the space race. Becoming the first company to be able to build a fully reusable rocket, capable of carrying the largest payload and can conquer all space surfaces like the Moon and Mars and beyond.

At the same time, when its positions have been proven, SpaceX easily becomes a reliable partner of other space companies and organizations. Following that, they’ll be able to earn additional revenue from signed contracts.

Only with SpaceX would certainly be flawed to talk about the meaning of this flight. Let’s be honest. After SpaceX, NASA is the one most looking forward to this flight.

The agency has already made a bet on Starship, with a selection as the human landing system for Artemis, the largest cutting edge.

The vehicle is now on the critical path to landing humans on the moon, NASA’s most ambitious human spaceflight program in half a century. As a result, NASA’s watching every step of the development of SpaceX Starship next.

It can’t be denied that this orbital flight has implications for the entire space industry, and our planet. This flight will open the door to orbital tourist flights, which could render the aircraft industry obsolete. It’s also one of the goals of SpaceX.

But Now, SpaceX SpaceX beginning on August 3rd abruptly flips a switch and starts to test Ship 24, with some degree of urgency. It’s possible that the Starship could be cleared for the first orbital launch attempt by the end of August. Super Heavy is a much larger hurdle.

Aside from the apparent removal of all of Booster 7’s 33 Raptor engines, which will likely take two weeks to reinstall and re-cover, its status is somewhat ambiguous.

If SpaceX decides to fast-track Booster 8, that’s almost ready for engine-less proof testing. The Super Heavy side of Starship’s orbital launch debut, is probably at least two or three months away from flight readiness.

Thanks for reading till the end. Comment what your opinion about this information:- ”Elon Musk Just CHANGED The Plan On Booster 7 For Upcoming First Orbital Flight. Why?”