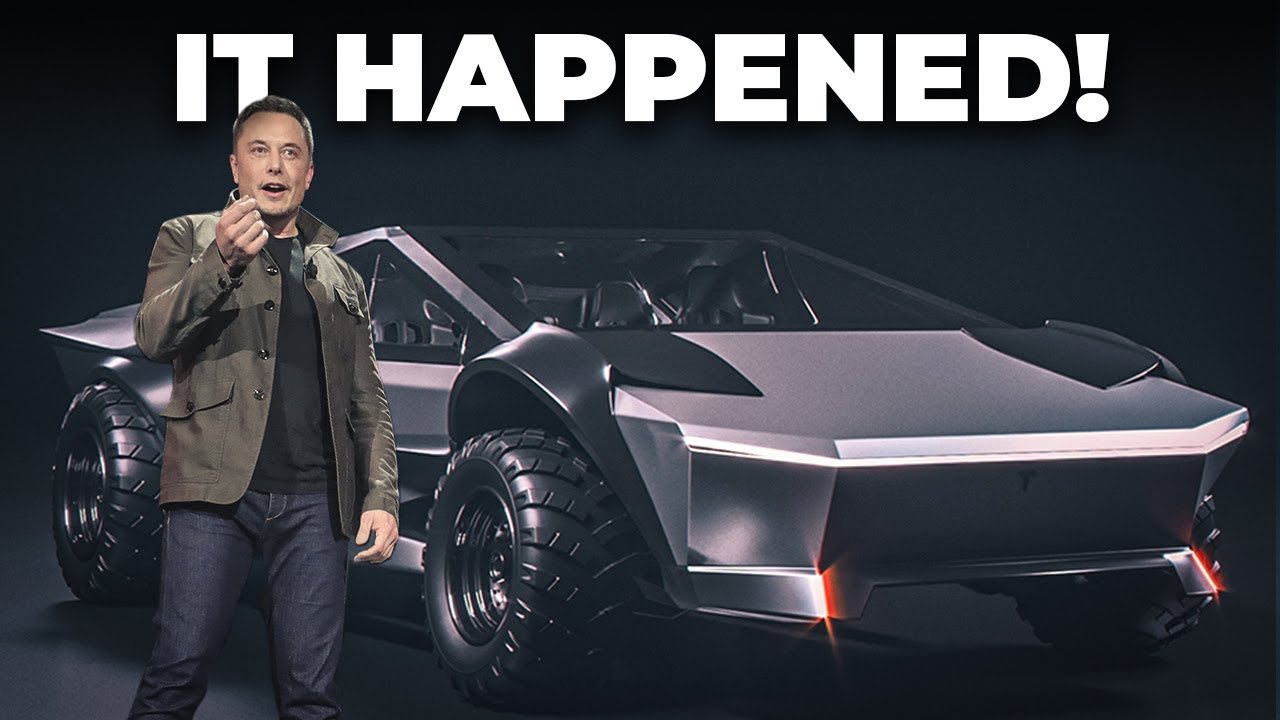 It’s been more than two years since the electric car maker announced the Cybertruck, but the excitement and hype around the all-new concept electric truck have not died down. Musk has revealed that the New Tesla Truck will have some of Tesla’s flagship tech, making it one of the most technologically advanced electric trucks out there.

Looking at the Cybertruck conveys the feeling that it is a piece of tech, unlike anything we have ever seen before. There is another surprise waiting in this truck that will astonish you.

Tesla’s Cybertruck looks out of this world; we just have to get that out there. Even in real life, it is hard to believe that this electric truck is not a computer-generated image brought to life.

The teaser video released only further proves that the Cybertruck is just ethereal. The video, shot by a drone flying over Tesla’s factory, shows several points where the viewer will almost be required to look twice to determine if the vehicle in the video is a genuine Cybertruck.

Unfortunately, the video was shot in a low resolution, making it harder to get useful information. But, something stands out about the Cybertruck.

Shows that the Cybertruck has side mirrors. This is an improvement to the other prototypes that have been spied that lacked side mirrors.

Tesla has been pushing to replace the side mirrors on the Cybertruck with cameras to increase aerodynamic performance, which will increase the truck’s efficiency and capabilities.

But many experts have pointed out that a lack of side mirrors would be dangerous and be against safety rules and regulations. Side mirrors are essential for a clear view of traffic behind you.

They can also help you spot pedestrians and obstacles. It has also been reported that Tesla plans to update the production version of the Cybertruck for the upcoming model year.

One of the most important upgrades coming to the new Tesla truck is rear-wheel steering. Due to the amount of technology crammed into the electric truck, Tesla will find ramping up extremely difficult even with the extra time it has given itself with the postponement of the launch date for the Cybertruck.

The Cybertruck’s prototypes are expected to be tested on public roads like the Rivian Avanti truck and the Ford F-150 Lightning. These trucks have been spotted on the road over the past year, but prototype sightings of the Cybertruck have remained very scarce.

Musk announced in the summer of last year that the New Tesla Truck will have four-wheel steering. This feature should let it perform feats similar to the Hummer EV’s crab mode.

Musk stated that the feature will enable tight turns and maneuvers with high agility. The feature was mentioned when other EVs with rear-wheel steering like the Mercedes EQS had just been released.

Reports and rumors claim that Tesla is installing some equipment on the Cybertruck prototype. These are probably sensors, but there are also some trim pieces around the wheel wells and the bed, which have been covered.

From the recently released drone footage, it is clear that the latest version of the truck will be smaller than the versions that had been previously discovered. This has also been debated since the latest pictures of the Cybertruck were released.

It is not clear from the video whether the enormous single windshield wiper, which has been a controversial addition to the Cybertruck, remains active or not.

The material used for the construction of the Cybertruck hasn’t changed. The body is constructed of thick cold-rolled stainless steel, a material that is majorly used when making rockets.

This is very different from the typical thin pliable steel used for making other cars. The majority of the body panels of standard cars are made with stamping machines that can create complex shapes with a wide range of tolerances.

So to bend such steel, a deep score needs to be created inside the bend, and that’s how the prototype was made.

The material used in the construction of the Cybertruck is why it looks so bizarre, with flat edges everywhere. The odd design of the current prototype has prompted a lot of comparisons.

Apart from this prototype, another prototype looks to be one of the most ambitious projects yet. It is a kit, or rather an accessory, that allows the Cybertruck to be converted for use on the water. This accessory is known as the CyberKat, and it turns the Cybertruck into an electric boat.

The CyberLandr is another interesting accessory that tries to fit an entire camper into the back of the electric pickup truck. Rear-wheel steering and clearance enhance this electric truck’s off-road capabilities.

The CyberLandr kit will make the Cybertruck the perfect camper vehicle. The newly announced CyberKat Catamaran is the surprise waiting for you. It is a product that has been designed for the Cybertruck, which has not entered into production yet.

In comparison to the Cybertruck itself, it looks to be more ambitious in comparison. The project was conceived by Anthony Diamond, a Scientist from Berkeley with a Ph.D. in material science.
Anthony has an excellent eye for detailed designs and is a serial entrepreneur. The design of the CyberKat was explained on a new website.
As a Model 3 owner with a reservation for the Cybertruck, Anthony was very pleased when Elon Musk revealed that the Cybertruck would be able to function as a boat for a short duration.
This announcement motivated the development of CyberKat. The concept is an easy-to-assemble kit that can be attached to the Cybertruck to transform it into a catamaran. The particular model in question is equipped with one to five 50-kilowatt outboard motors powered by the battery pack on the Cybertruck.
When combined with Cybertruck’s adaptive air suspension, the concept could potentially make the CyberKat amphibious. Thanks to the foldable inflatable pontoons and the adaptive ride height of the Cybertruck, the CyberKat will offer 12 inches of ground clearance.
The onboard electric motors, pontoons, and hydrofoils will fold down upon entering the water. At the same time, the wheels retract so that the CyberKat can be quickly launched in shallow water or when working around docks.
The CyberKat can carry out precise maneuvers merely by rotating the wheel of the Cybertruck, so you always feel in control. There is no working prototype yet, but a top speed of over 25 miles per hour equals 22 knots or more, and a range of 50 to 115 miles depending on cruising speed can be achieved.
The cruising speed is based on a Cybertruck that has a range of over 500 miles on a full charge on land. The company aims for a price range between $22,900 and $32,900, depending on the number of outboard motors the customer desires.
The company also plans a hydrofoil version of the kit for customers who want improved speed and efficiency. The company included hydrofoils to optimize the efficiency of the vessel on the water and unleash the highest form of performance an all-electric watercraft can offer.
This results in a price increase of about $10,000. Unlike CyberLandr, CyberKat is still in the early stages of development. The company isn’t taking any reservations just yet.
But they are ready to take reservations when the market has been tested. Common sense tells us it is risky to embark on such an ambitious project for a concept car that hasn’t gone into production yet.
The Cybertruck has been delayed several times; last month, Tesla announced that the deadline for the Cybertruck has been pushed to at least 2023.
Once the Cybertruck ends up in garages or on the road, it would be interesting to see these exciting accessories fitted on them. Then, we can gauge just how well these accessories will work and how much fun they will be.
We will also see how drivers will react to their new technology. The worldwide supply chain issues and chip shortage issues have contributed to the delay of the Cybertruck, and Musk has confirmed that Tesla would not start the production of the Cybertruck before the end of 2022.

Thanks for reading till the end. Comment what your opinion is about this information:– “Elon Musk SHOCKED The World With NEW INSANE Tesla Truck! Take A Look”