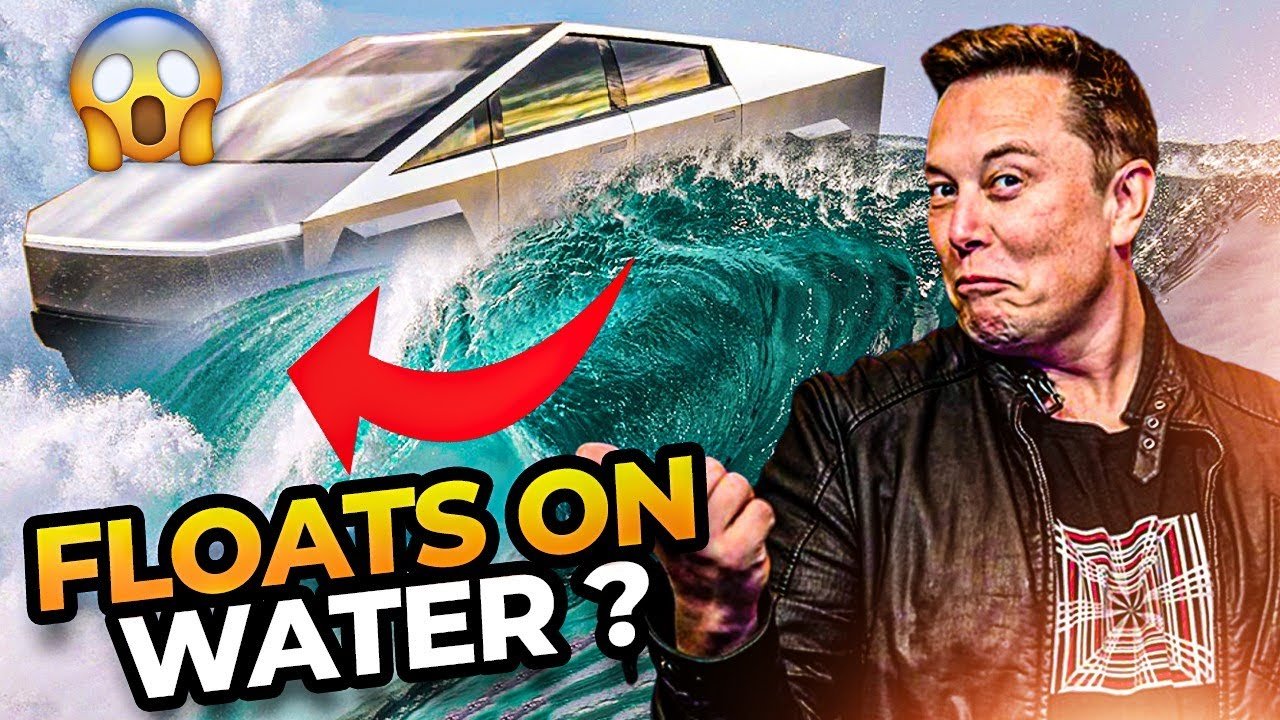 Elon Musk Reveals Tesla Cyber Truck Will Work As A Boat. How?:- As we patiently wait for the final release of the Cybertruck despite the numerous setbacks and delays, Elon Musk has released another impressive detail about the vehicle.

The Secret Of TESLA CYBER TRUCK

WATERPROOFING According to recent claims made by Elon Musk, the outspoken CEO of the electric-car giant Tesla, the delayed Tesla Cybertruck may be able to cross rivers, lakes, and even calm seas, according to previous statements made by Musk.

These claims contradict previous claims made by Musk that the Tesla Cybertruck could not cross rivers, lakes, or calm seas. [In a Twitter post, Musk stated that Tesla’s upcoming electric Cybertruck will be “waterproof enough to serve briefly as a boat”, adding it could “cross rivers, lakes and even seas that aren’t too choppy.”]

According to Musk, the Tesla Cybertruck “needs (to) be able to get from Starbase to South Padre Island,” the rocket launch site of his space company SpaceX, and a nearby island with further facilities, respectively. [Amidst all this, the Cybertruck was allegedly seen being secretly tested, and that’s what’s coming shortly in the video if you stick around.]

Following the debut of the Tesla Semi prime mover in North America at the end of this year, the long-awaited Tesla pickup is now scheduled for delivery in the United States in the year 2023; however, neither electric vehicle has yet been confirmed for the Australian market.

LAUNCH WINDOW Tesla’s production schedule for the Cybertruck has been moved back from late 2021 to late 2022. When asked about reports of a new Cybertruck delay, Elon Musk said the company will not release any vehicles until 2022. So, we shouldn’t expect to see the Cybertruck any sooner than 2023.

The Truth About TESLA CYBER TRUCK

At first, the holdups were thought to have originated with the car industry’s widespread supply chain problems. Elon Musk stated that Tesla would need a new casting machine to produce the steel chassis needed for the Cybertruck’s 4,680 battery cells.

Despite being transparent about its plans, Tesla has said it won’t start making the Cybertruck until the Texas Gigafactory starts cranking out the new Model Y. Tesla is now free to begin manufacturing Cybertrucks despite the fact that this initiative did not begin until March 2022.

Elon Musk has stated that Tesla hopes to complete Cybertruck development by the end of 2022, with production starting in 2023. He affirmed that, as anticipated, manufacturing will begin in July 2022 and that vehicles will begin hitting the roads in the middle of 2023.

Later, he declared that 2023 would be the true release year for the Cybertruck. If all goes according to plans, the Cybertruck might begin its journey shortly after. [I just figured out why Teslas are so expensive. It’s because they charge a lot.]

Want To Step Up Your TESLA CYBER TRUCK?

On the other hand, Musk claims that the company’s order backlog is so large that it might take up to three years to complete. We wish you success in placing an order if you haven’t already. RIGOROUS TESTING According to recent reports, Tesla is now testing the Cybertruck with what appear to be extra cameras.

The whole Mars catalog tweeted out a picture of the Cybertruck. Once the long-awaited van arrived, its contents showed a wide range of sensors, including equipment for calibrating cameras.

The image shows a Cybertruck that has been through extensive real-world testing by Tesla, as seen by its damaged appearance and the presence of dust. This image reveals that Tesla’s employees are carefully adjusting the Cybertruck’s sensors and cameras in anticipation of the manufacturing ramp planned to begin in about a year.

Musk explained that Tesla “got too carried away with the” phrase during an interview with Tesla Owners in Silicon Valley. [At a later part of the video, we’ll also talk about some improvements that the car has gone through since its first announcement, notably the new motors and power components.

These have given it a huge boost in efficiency, and we must talk about it.] They halted, which may have been because they were struggling to employ the Cybertruck’s fundamental capabilities. Still, I don’t believe that Musk and the dedicated Tesla crew will not be able to triumph over these challenges.

They’ve proved that they’re the firm that saves the globe by championing renewable energy and working to make electric cars affordable, user-friendly, safe, and style. Chief Designer Franz von Holzhausen famously crushed the Cybertruck’s stainless steel chassis with a sledgehammer at the introduction to prove the vehicle’s resilience.

Tesla Armor Glass is used in the construction of eyewear. CESSATION OF PREORDERS IN EUROPE On its websites in the UK and the EU, Tesla no longer allows users to place an order for a new Cybertruck. Willing cyber-truckers have already taken a hit due to Elon Musk’s declaration, which was made public during Tesla’s financial report for the year 2021 and stated that the company would not be producing any new models in the year 2022.

[If you place an order for one of these forward-thinking four-door trucks before the year 2023, it is unlikely that you will be informed of the exact day on which your vehicle will be delivered.] NEW MOTORS AND POWER Originally, the Cybertruck was going to be powered by three electric motors.

Elon Musk has teased that he plans to release a new Tesla Cybertruck with four motors and a “Crab Walk” feature, not unlike the Hummer EV, around December 2021. When off-roading, the four-wheel steering of the Hummer EV allows it to drive in a crab-like swerve to avoid large boulders and stones.

Tesla’s approach, according to Musk, would function “not simply like a tank,” in which the vehicle is spun instantaneously by the wheels on its left and right sides moving in opposite directions. This seems to be a disguised jab at Rivian, another electric car maker whose R1T pickup truck offers a similar feature.

Musk also stated that those who had previously placed orders for Cybertrucks with less than four motors would be eligible to upgrade to the new quad-motor version. It is unclear if these variations will still be available after the production of Cybertrucks begins.

As everyone knows, Elon Musk famously announced that ” Plaid+ is canceled. No need, as Plaid is just so good.” shortly after the manufacture of the model had begun, canceling every Plaid+ order that had been placed.

While the Cybertruck might be getting some cool specs, Tesla’s other vehicles are not doing so well, as the Model Y reportedly has some significant issues that may hinder the safety of its occupants. Check out our video on Elon Musk 2022 TESLA MODEL Y Issues: Why You Should Not Buy it Yet. If you’re a potential Model Y buyer…

Thanks for reading till the end. Comment what’s your opinion about this information:- “Elon Musk Reveals Tesla Cyber Truck Will Work As A Boat. How?”

5 thoughts on “Elon Musk Reveals Tesla Cyber Truck Will Work As A Boat. How?”