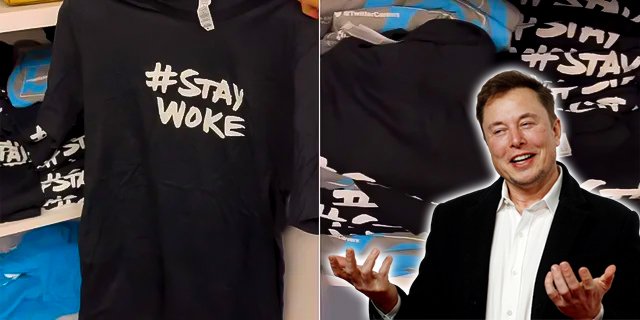 Elon Musk mocks shirts he found in Twitter’s building. Take A Look:- Elon musk mocking a t-shirt the company made a year ago to show support for black employees and users.

Jack Dorsey wore the shirt in a panel. Some critics criticized for him wearing it. He mentioned being on the ground in Ferguson over the shooting of brown. Elon musk then erased the post.

Musk replaced the deleted tweet with a follow-up link containing a link to the department of justice report on brown’s death. Musk said that hands up don’t shoot was made up, the whole thing was fiction.

It was concluded in the report that Brown was shot when he was moving toward the officer. This is what musk referenced in the tweets. The DOJ did not find grounds to charge the officer but it did find evidence of racial discrimination in Ferguson at the hands of the city’s police department and municipal court.

The DOJ in its report pointed to the statistics for proof. Black people in Ferguson are twice as likely to be searched in vehicle stops than whites.

Though whites were found to have contraband at a higher rate. At least 85% of those pulled over or ticketed were black and the justice department said it was money, not public safety that the department focused on. And black citizens paid the highest price.

Tesla’s market value has taken a huge hit this year and this time a year ago the company’s value was around $1.2 trillion. By the end of the day yesterday, it sat at $580 billion. Those numbers are from Forbes and do the math that’s more than a $600 billion decline.

To put this loss in perspective. It’s not a paper loss, the share price here. Disney is worth about $180 billion, Nike $167 billion, and Starbucks $114 billion. Let’s bring in peter Shankman, a futurist at blue shark digital. Good to have you here.

I don’t know how I got through the intro without saying Elon musk. >> shouldn’t Elon musk be paying attention to tesla? I’m trying to run one company on my own, he’s running four.

If you are spending your time creating memes and arguing with politicians publically you’re not running your business. From tesla’s standpoint if I was a shareholder. The shareholders had him on the stand in a trial last week because they’re mad.

It’s hard to prove he’s not working for tesla. But they can say you stole engineers from tesla to bring them to Twitter. That’s a problem. Tesla is overvalued, been overvalued for a long time, no question about that. But if he was smart he’d say it’s overvalued, let me be quiet for a while.

He’s doing everything possible to draw more attention to himself. What was your analogy when we talked about it during the break? I have a dog, waffle, two years old.

Every time he does something stupid steals a steak off the table. He eats it and looks at me. Who stole the steak? Hello. If he didn’t look attention to me, maybe I wouldn’t pay attention to it and move on. Same with tesla. He’s not giving anyone a chance to forget about him.

What’s with this these guys? They can’t help themselves -they’ve never been told no. They surround themselves with people who have always yessed them.

So now people are arguing with him, making a fool of him. He’s the number-one joke on Reddit right now. So he says let me buy Twitter and I can have my platform to say what I want. And this is affecting his other businesses.

And also $44 billion is not as rich. That’s right. It adds up to real money. I’m hesitant to underestimate Elon musk because of what he has done. So we’ll see. But right now it doesn’t look good. However,, an interesting point about that, $44 billion wasn’t his money.

There are a lot of lenders. As I understand it, the debt to finance this is backed up by tesla, so tesla could take a bigger hit if this goes under. He shared in tesla. He’s already sold an additional 3 billion, there’s more coming.

When everything is linked that closely. I wouldn’t want to invest in something linked that close to other things and him not being quiet because it stops being about the company and starts being him. You can’t have good company when it’s only one person,

Thanks for reading till the end. Comment what your opinion is about this information:– “Elon Musk mocks shirts he found in Twitter’s building. Take A Look”