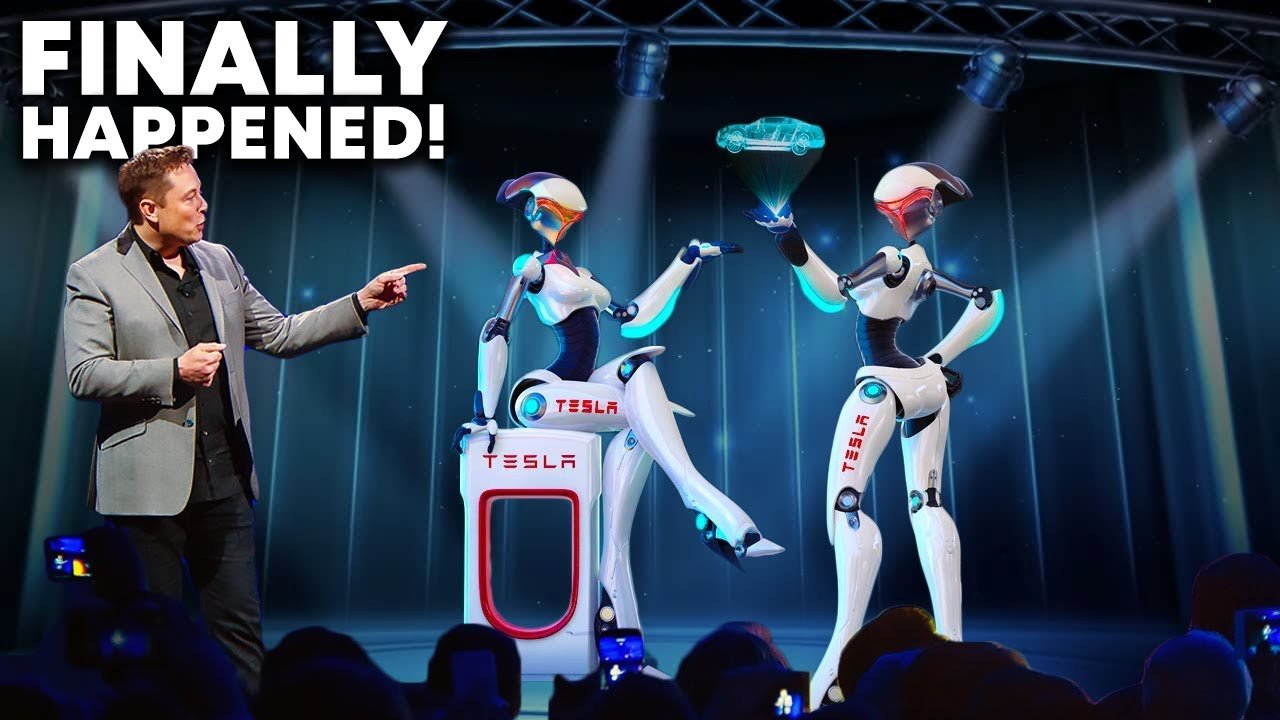 Elon Musk First Prototype Of Tesla AI Robot Revealed:- The tech giant that was once restricted to revolutionizing the automobile and space industry has just put the biggest stepping stone in the world of artificial intelligence.

Beating all the other tech giants, Musk is ready to create the mind-blowing technology that will change the world as we know it!

Elon Musk is all set to work beyond Tesla and SpaceX and achieve yet another milestone in the technological world. Musk has always talked about how the world needs to revamp technology and how technology has the potential to revolutionize the world.

In one of the interviews, Musk revealed how he wants to keep experimenting with the technology and see how far his mind can go to overhaul the world. The brainy mind has always come up with something new every year that appalls the audience, such as, he came up with self-driving cars that were never seen before.

When asked more about self-driving cars in an interview, he revealed how the technology translates its robotic works into cars and how most homes will soon have human robots in the future.

Furthermore, Musk also says that by 2050, every household will have a robot as these man-made creatures can do everything better than humans. And soon, all of the tech companies will be making one. Musk also went on to say that the companies that won’t be working on artificial intelligence and human robots will soon be left behind and will be crushed by the market behemoths.

Thus, it is high time for all the companies to at least start making a layout for the future robots, as they will be all over the world in a few years. And when it comes to technology, Elon Musk is never left behind.

Elon Musk said that it took him a long time to realize that solving the self-driving necessities requires solving the artificial intelligence. Self-driving cars are simply robots on four wheels, thus, all you have to do is put the same robotic features on the four legs to make a robot.

This theory of Musk was also supported by market giants such as Boston Dynamics, who have a firm belief that it is possible to develop compelling humanoid robots that can do all of the tasks using AI. Despite all of the information, Elon Musk is still baffled about one thing.

Despite knowing all of the hacks, Musk has yet to find the answer to the biggest question. Musk is eager to solve all the obstacles that come in the way of making robots. According to Musk, in the modern world, there is a lack of intelligence, which can give space to the robots to explore the actual world and do meaningful things without being instructed at each step.

Musk says that Tesla can easily find the solution to these two massive problems. However, there is still one biggest issue left. This issue is keeping Musk away from bringing the path-breaking robots into the world.

Musk says that while he can handle all the other problems, the problem to develop the actual sensors and actuators is still unresolved. That is, the problem is not to create a perfect vision for the robot, but to execute the vision. He pointed out that sometimes people miss the fact that making a robot is quite larger than any car business.

Nevertheless, the tech giant envisions a place where every department would have robots, performing every type of task. Elon Musk unraveled every detail in the 90-minutes presentation.

From talking about its features to the threats, he spilled the beans on how robots will soon take over the world with their exceptional features.

Future of the world

Talking about the Tesla robot that Musk has just revealed, here is all you need to know about the infamous robot. The 90 minutes presentation, given by Elon Musk, told everything about this stupendous robot. The extensive presentation showed how artificial intelligence has upgraded Tesla into electric vehicle cars, which drive around the city without human assistance.

He further explained how this can be transformed into a robot. Musk unveiled all about the latest Tesla robot, and it will surely blow your minds off. The tech giant revealed that this amazing robot would be a 1.7 meter, 56-kilogram robot, which will have astounding features that you might have ever imagined.

He claims the bot will have a screen in front of its face that will display information. According to Musk, the humanoid robot would be able to deadlift 68 pounds and carry roughly 20 kg. The bot, nevertheless, will only be able to drive at a speed of roughly 8 kilometers per hour.

Lifting 68 pounds is definitely huge, and despite having immense expectations from Musk, we surely did not see this coming in the first attempt. As per the speculations of Musk, the bot will employ Tesla’s Autopilot software.

It will include eight cameras that will be input into the neural network that Tesla created for its FSD software. The real problem is still about the appearance of robots and the obstacles they can overcome easily. Our cars have numerous cameras which allow them to analyze the surroundings and label different routes and images.

These cars have a neural network that emulates the function of the human brain, which not just identifies the problem but works accordingly. The tesla robot would use the same feature. As mentioned by Musk, the formula of the Tesla robots and cars will almost be the same.

Musk described his automobiles as “semi-sentient robots on wheels” while mentioning that “It seems reasonable to place the same software on a human-like form as well. Having said that, Musk is still skeptical about robots taking over the world. He thinks we need to be more cautious.

The Fears of Elon Musk With the rising structure of the robot, there is yet another rising concern. People are still baffled about the nature of the robots and the tasks they could perform in real life, as shown in movies.

There were numerous speculations about how the robot would be in nature. Well, Elon Musk made sure that the robot would be nothing as shown in the movies. Instead, it will be good, after all, it is made to follow the commands of humans.

The bot is planned to be “friendly,” according to Musk, and will be employed to undertake monotonous and risky duties. He went on to say that the true test would be how the robot navigates the world without being taught what to do. “There will be significant economic implications.

Physical labor will be an option in the future “Musk stated the following. Although Elon Musk has long talked about how robots can be harmful to the world. He did point out the fact that robots can easily overpower human beings.

He went on to add how robots can be used as weapons against humans and how this can easily wage a war among people. Calling them the biggest risk to civilization, Musk said that the tesla robots will be incredibly slow and easy to overpower.

Here, incredibly slow does not mean that they will do all of the work at a slow pace, instead, it means that they will be made with very less danger. Tesla has still not made a working robot, despite the CEO’s artistic description of what he wants it to look like.

He stated that the business intends to produce a prototype by the end of next year. The robot, according to Musk, would be manufactured using many of the same materials that Tesla uses in its automobiles and will integrate neatly into Tesla’s goal.

While Musk did not provide a particular release date for the prototype, he is renowned for making huge claims regarding future releases. Musk predicted at Tesla’s previous “Autonomous Day” that by the end of 2020, the company would have “one million robotaxis on the road.”

Musk’s robots lead to a common belief that they will be beneficial for all humans. However, there are always two sides to the coin. These robots are a serious threat to the world.

The Threats To The World

Here is yet another question that has made all mankind curious. Since we know how much of an innovative mind Musk has, we know that he will soon find a way to transform the world into robots. But you might be wondering that there is no use in making such appealing robots when people could not buy one.

As much as technology has played a part in revolutionizing the world, it is also a fact that only a few have been able to buy them. People also speculate that it would be too expensive to buy.

For this, Elon Musk has already warned that the world will have to work extremely hard to avoid a terrible end in the field of Artificial intelligence. He stated that one of these other companies, Neuralink, with which he joined hands in 2009, was specially made to mitigate the threat of artificial intelligence.

In one of the infamous interviews where Musk was made to have a chat with the Artificial Intelligence robot, he stated that it is quite difficult to analyze the difference between a robot and a human and there are a lot of chances of error.

He pointed out in the interview that a localized ROM chip that cannot be updated over the air aid in the preservation of safety features, such as when someone asks a robot to hold, the robot would stop what it is doing. Musk also believes that there should be a regulatory authority for artificial intelligence.

Putting Musk’s thoughts into words, such a robot will initially be deployed to undertake risky and boring labor that no one wants to do, and then, it will progress to the point where it can look after people, cook dinners for families, and mow the lawn among many other things. But people are still baffled about a lot of things that they had asked Musk in a series of questions.

According to Musk, for two years, a robot would be easier to make than a car. When Musk displayed his analysis, he unraveled that the cost of production will initially be greater, which will be then carried forward by the cost of manufacturing, a much lesser cost.

This will decrease the cost of production in the coming years and we will witness a growth in humanoid robots since there will be a reduced price. In the FAQ sections, Elon Musk revealed that executing the plan is never easy and it takes a lot of finances.

Most companies, including Musk, do not always have major finances to take up such large-scale decisions. He wittingly said that all of the projects can only become successful on time if people want to work for free. Nevertheless, we know that it will never happen in the real world.

Many critics have voiced out about the robot projects which have been given the name, Optimus prime. Many people have claimed that Elon Musk is long known for making unrealistic claims. People went on to say that even the idea of self-driving cars seems impossible shortly.

Tesla is known for making promises, but when it comes to the launch of products, there is no denying that Tesla takes a long time.

Thus, we are quite sure that this project will also take around 5 to 6 years to come into existence. But what we do agree is that with the inception of the Tesla bots in the world, the cost of manufacturing Tesla will come down.