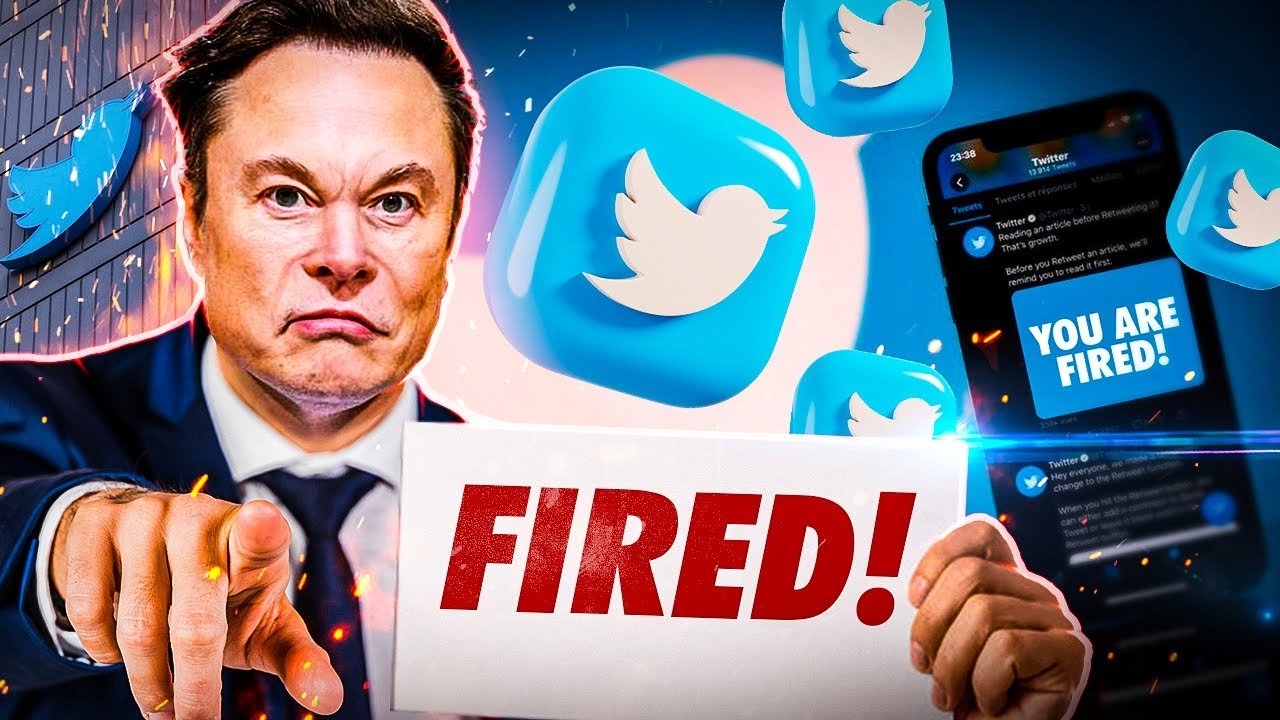 Elon Musk Fires Thousands Of Twitter Employees – This Is Why?:- Elon Musk is finally the sole owner of Twitter, and pretty quickly, he’s starting to lay down the hammer on employees that have been with the company for years.

There have been a lot of mixed reactions to this so far, but Musk thinks he’s making the right choice. Will the layoffs help make Twitter a better place, or is Musk getting rid of all of the people that know how to run Twitter?

Elon Musk officially took over Twitter on October 27, 2022, and he has already turned everything upside down. One of the first things that he noticed was how much money Twitter was losing. It was nearly $3 million every single day, well over a billion dollars a year.

Musk believed that it all boiled down to how many employees the company had and how many useless departments were burning through cash. Very quickly, Musk started to fire nearly every employee he thought wasn’t worth the company’s time.

He didn’t personally call anyone, arrange a meeting, or even say goodbye. All he did was send an email to nearly 3,700 former employees and tell them they were fired. Many of them didn’t even read the email and only found out when they were locked out of their computers.

It was abrupt, and quite frankly, chaotic. No one knew what was happening, and this included Elon Musk as well. He didn’t even know who he was firing.

Many employees were “accidentally” fired as well, The next day, there was a lot of blowback from employees. Musk wasn’t just firing specific employees, but rather entire departments. For example, India is the third-largest market for Twitter with over 24.45 million active users.

Musk fired over 90% of the Twitter India employees, leaving the subsidiary a shell of its former self. This wasn’t helped by the fact that, weeks later, Musk pointed out that Twitter worked slower in India than it did in other countries.

Maybe firing the entire Indian workforce had something to do with it? It’s estimated that around 50% of Twitter’s global workforce was fired by Musk just weeks into his entry. Many of the firings may as well have been at random.

There’s no way Musk could’ve individually checked thousands of profiles to see if they were worth keeping around. Many people who still work for Twitter also started to speak out against the changes.

It all reached a boiling point when Musk tweeted an explanation of why Twitter was being slow in certain countries, specifically on Android. This prompted an active Twitter employee, Eric Frohnhoefer, to say that he has worked on the Android app for 6 years, and Musk’s tweet made no sense whatsoever.

After that, Musk and Frohnhoefer went back and forth on what’s the cause of the app being slow – publicly, might I add. As soon as things got uglier and uglier, Musk announced that Frohnhoefer had been “fired” in a tweet.

While publicly feuding with your boss is going to get you fired, Musk’s response didn’t win him any fans either. But at least Frohnhoefer knew he was fired. Others weren’t so lucky. Melissa Ingle worked as a data science contractor on Twitter.

She specifically worked on combating political misinformation, a part of Twitter we know Musk isn’t too big of a fan of. Melissa claimed that she woke up one day and lost access to her Twitter email and internal system. She wasn’t given any prior notice and was fired.

Since Ingle was a contractor, it was much easier for Musk to fire her. She did not receive any severance package either. Musk also wants all employees on Twitter to show up at work every day. He doesn’t believe in “working from home”.

The vast majority of Twitter’s remote staff has been laid off, and the remaining are bracing for the final email as well. Despite all of his criticism for the firings, Musk didn’t care. He sent out a tweet saying, “I would like to apologize for firing these geniuses.

Their immense talent will no doubt be of great use elsewhere.” But not all was well for Elon Musk following these layoffs. As we mentioned before, the company was firing so many employees at once that it was nearly impossible to see who they were laying off. Some of these employees were almost integral to simply making Twitter work at times.

Bloomberg reported that many of Twitter’s former employees were reached out to by the company and asked to “come back”. They were told that they were fired “by mistake”.

That’s not entirely surprising. When a platform has hundreds of millions of active users, you can’t just lay off half the workforce and expect things to run smoothly.

There aren’t many reports on how many people took their jobs back, but considering the constant shortage of skilled workers in Silicon Valley, the company would have to make a pretty good offer if it wants them back.

But these layoffs have some serious implications for Twitter that aren’t related to performance. Shortly after the first wave of terminations, Twitter was sued by an ever-growing group of former employees who believe they were wrongfully terminated following Elon Musk’s acquisition of the company.

The class-action lawsuit claimed that numerous worker protection laws were being violated, including the Worker Adjustment and Retraining Notification Act and the California WARN Act. In both of these laws, companies are required to give workers at least a 60-day notice before they can be laid off en masse.

Because many former employees pointed out how they weren’t even given a text message saying they were fired, it seems like the Tesla owner is in some legal trouble.

Elon Musk didn’t directly respond to the lawsuit initially, however, he did say that all fired employees would receive 3 months of their salary as compensation, but this also means that those who agree to the severance package will not be able to join the class-action lawsuit.

Plaintiffs of the suit warned employees, specifically those that weren’t notified beforehand, to be wary of anything offered to them by Twitter after the act. If the former employees win the lawsuit, they will likely receive their missed salary, compensatory damages, declaratory relief, pre, and post-judgment interest, and legal fees.

All of that would likely add up to way more than the 3-month salary Musk is offering at the moment. With the new “severance package”, it’s clear that the Twitter headquarters is currently panicking about the implications of what they’ve done.

If paying these employees a salary was squeezing the company out of money, paying them for damages could potentially bankrupt it. From this point forward, Musk took a more careful, but equally as aggressive, approach.

On November 15, he sent out an email directed to every single employee that was currently working for Twitter. In the email, he said that the company’s main goal would be to work day in and day out trying to build “Twitter 2.0”.

The email described the process as being “extremely hardcore” and it would require employees to work long, intense hours almost every day. Remote work likely still wasn’t allowed. This time, workers were given a yes or no choice.

If they clicked yes, they would agree to work exorbitant hours to make new features for Twitter. If they clicked no, they would receive a 3 months severance package and would be laid off from their job. Ironically enough, these employees wouldn’t have had to work at “intense” hours if there were simply more people to do the job.

One has to wonder if being overworked is going to affect employee productivity. On top of that, the severance package might also backfire. It pays more than what Twitter is legally required to pay laid-off employees, and in the case of highly skilled employees, they’d much rather take the package and find a job in another company rather than commit to those harsh conditions.

It’s too early to tell whether or not Musk’s “offer” will be a success, so we’ll have to wait and see. Overall, Musk has received an overwhelming amount of criticism because of the way he has treated employees. However, there’s also an argument to be made that if it wasn’t Musk, it would be someone else.

Twitter isn’t the only company that’s firing people left and right. Facebook recently laid off 11,000 employees, nearly 13% of its workforce, because of declining profits. Twitter isn’t nearly as successful as Meta, so burning through $3 million a day just wasn’t in the cards.

Sooner or later, someone would have to make that decision, and Musk decided he would do it early on. Was it harsh at times? Yes. Will it potentially affect Twitter’s performance? Probably. But was there any other option? It doesn’t seem like there was. Musk is trying to change Twitter for the better.

He wants to make it a more open place with employees that are dedicated to the company. But at the same time, he knows Twitter needs to make money if that’s going to be a possibility. That’s a wrap for this video! Do you think Elon Musk firing all of these employees?

Thanks for reading till the end. Comment what your opinion is about this information:– “Elon Musk Fires Thousands Of Twitter Employees – This Is Why?”